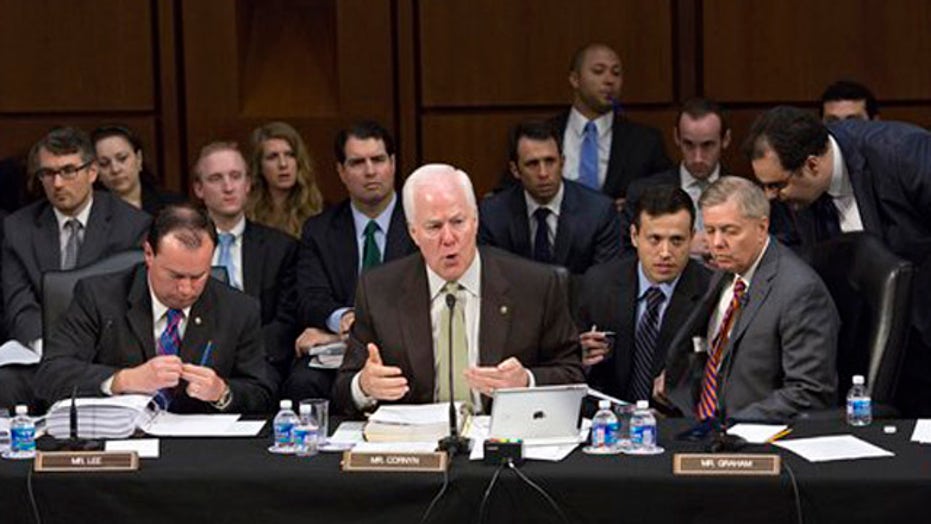 The Senate takes up immigration reform

Immigration reform is, at its core, a human issue.  Good policy is driven by good data, but we must never lose sight of the fact that behind every statistic there is a person – a son or a daughter, a mother or a father.

Last weekend, as I traveled through South Texas, I met some of these people.  The stories they shared with me illustrate the humanity of the immigration debate that all sides must acknowledge.

In Rio Grande City, I met a young woman who came to Texas to escape persecution in El Salvador several years ago. She did so illegally, paying thousands of dollars to be smuggled across the border.

After arriving in Texas, she fell victim to the same man she had entrusted to bring her into the country. He beat her, raped her, and forced her into a life of prostitution. For years she endured this terror and misery, until she summoned the courage to reach out for help.

By the tragic standards of illegal immigration, some would say she’s among the lucky ones. Unlike so many others, she survived the grueling trek through South Texas that has needlessly taken the lives of so many.

For ranchers in Brooks County, some 70 miles north of the border, the sight of illegal border-crossers traversing their land is routine.

In my short time there, I saw many.

Even so, it is often the migrants you don’t see trudging through the brush that offer the most heart wrenching reminder of the dismal state of our immigration system.

These ranchers told me how terribly common it is to find human remains around their homes.  These are the ones who didn’t make it – the ones who fell behind and were left to do die by a smuggler who treated them like expendable chattel.  In an effort to save lives, many ranchers leave stashes of water throughout their property, but the corpses continue to accumulate at an alarming rate.

It falls upon the Brooks County Sheriff’s Department to respectfully retire the unidentified remains.  I met with County Judge Raul Ramirez in Falfurrias, where he led me through a section of the local cemetery that has been set aside for this purpose.

Row after row of burial mounds cover three sections of the cemetery.  At the head of each mound is a simple aluminum marker bearing a serial number, a date, and a brusque description of what lies beneath: “female skeleton,” “skull,” “bones.”

Unknown and unidentified, they lay far from home and far from the American dream that lured them across the border.

Each grave tells a story that ends in tragedy, and collectively they tell the story of a broken immigration system and a border that is still porous.  The notion that these people died for the chance to live and work amongst us is at once humbling and horrifying.

As Americans, we have built a great country, but we have not built the immigration system necessary to serve it.

A great country deserves a great immigration system.  This means recognizing the incentives that lead to the growing number of nameless burial mounds. It means understanding the malevolent forces that transact in human flesh.  And it means giving federal, state, and local law enforcement agencies the resources they need to save lives and uphold our laws.

The basic challenge of immigration reform will be to reconcile our compassion as Americans to the fundamental importance of the rule of law, without yielding to either.  As a policymaker, I have a responsibility to find real solutions to these issues that are all-too-familiar to Texans.  Anything less only perpetuates this grotesque human tragedy playing out every day on American soil.