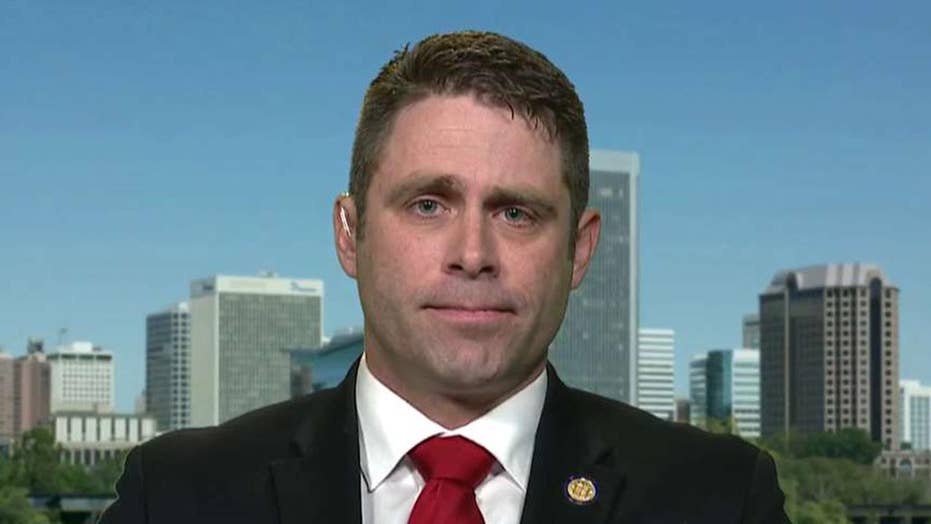 Republican candidate Nick Freitas sounds off about the gun debate.

Republican Virginia state Delegate Nick Freitas gained national attention earlier this month after a video of a speech he made on the floor of the House of Delegates defending Second Amendment supporters against vicious attacks went viral.

In the speech, he fought back against the politically correct overreach that’s become all too common – specifically, Democrats in the Virginia Legislature who demonized law-abiding citizens who support “the right of the people to keep and bear Arms” guaranteed by the  Second Amendment of the U.S. Constitution.

A video of Freitas’ floor speech has received 15 million views on his Facebook page, where he said: “For several days now, some Democrats in the Virginia House of Delegates have made public speeches comparing those of us who take our oath to the Constitution seriously, to include the Second Amendment, to Nazis and segregationists.”

The speech given by Freitas, a former Army Green Beret who served two tours in Iraq, put him on the map virtually overnight in the Virginia U.S. Senate race, where he hopes to win the Republicans nomination to run against Democratic Sen. Tim Kaine in November.

Freitas’ action is a prime example of the inevitable, growing backlash against the political correctness that increasingly permeates every facet of our lives.

After the tragic shootings at Marjory Stoneman Douglas High School in Florida on Feb. 14 that claimed 17 lives, businesses were attacked and pressured to take a side against the National Rifle Association and its 5 million law-abiding members.

FedEx was the exception – pledging to keep discounts it offers to NRA members – but other companies caved to extreme, politically correct demands to take an anti-NRA stance.

Delta Airlines, headquartered in Atlanta, capitulated to the PC pressure, announcing it would no longer offer discounts to NRA members. The backlash was fierce as the Georgia Legislature removed a $40 million tax break for Delta as part of a tax cut package that eventually passed.

So to deny just 13 discounts, Delta flushed a $40 million tax break. Maybe Delta’s shareholders are as PC as its leadership; if not, expect the next shareholder meeting to be very interesting.

Are we really now living in a world where all private businesses are going to be forced to take sides on political hot-button issues?

The obsession with political correctness has invaded the entertainment world as well. As we’ve recently witnessed, the Academy Awards show was completely overrun by PC politics.

Every year it seems we see less entertainment and more political posturing by people paid to entertain us – not to deliver political lectures. This year, the ratings for the Oscars continued to plunge, down 20 percent from last year.

You would think liberal politicians, PC executives and Hollywood would’ve all gotten the memo by now: America’s backlash against political correctness is one reason why President Trump got elected. But these people don’t deal in facts. They’d rather double down and continue their bully tactics.

Specifically the Democrats were offended when Freitas argued the facts when pushing back against the character assassination of on the left. Freitas said: "It was not our party that supported slavery, that fought women's suffrage, that rounded up tens of thousands of Asian Americans and put them in concentrations camps, that supported Jim Crow, that supported segregation, or supported mass resistance – that wasn't our party, that was the Democrat Party.”

This is the road of “tolerance,” laced with political correctness and rank hypocrisy, that says we can call you a Nazi and a segregationist but when you throw facts back at us and try to have a respectful dialogue, that road becomes a one-way street.

Freitas spoke passionately about looking beyond gun control as a solution to school shootings. He noted that gun-free zones have not deterred gun violence in schools. In addition, he encouraged long overdue scrutiny into policies enacted by liberals that have led to broken homes.

In this age of politically correct overreach attempting to infiltrate every part of society, it is a breath of fresh air to see an elected leader with the courage to start an honest, respectful dialogue built upon undeniable truths.

Delegate Freitas displayed courage we can only hope to have when he served in Iraq as a soldier defending our country. It’s refreshing to see a leader who won’t be bullied by politicians in a state legislature – or the U.S. Senate, where we just might see him next year.