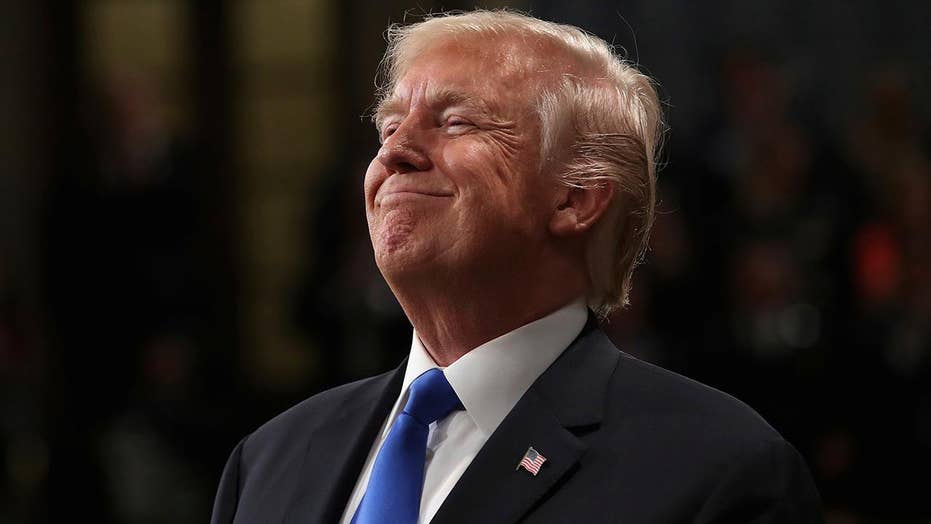 White House beaming after Trump's first State of the Union

Kevin Corke recaps the biggest moments from the president's speech.

I’m a Democrat and no supporter of President Trump. In fact, I’ve been quite public about my activism in response to the president’s policy agenda. At the same time, I want the president of the United States – whoever the president is – to succeed in improving the lives of all Americans, keeping the country safe, creating jobs with a living wage, and providing leadership in service of the public good.

Doing these things requires the understanding – if I may borrow a phrase – that the art of the deal lies in fidelity to your word. I may not want the deals President Trump would like to strike, but it is frightening to be led by someone who seems incapable of getting much done.

As I watched the president’s State of the Union address Tuesday night, I was reminded of a line from Michelle Obama’s speech in 2008 that Melania Trump repeated in 2016. Mrs. Obama said that she and President Obama were raised with many of the same values including “that your word is your bond and you do what you say you’re going to do.”

That’s a pretty basic level of decency we all look for in the people we allow into our lives, and certainly from those we allow to lead us. Whether you’re dealing with a friend, a family member, a teacher, a boss, a co-worker or elected officials, you want to be able to believe they are telling you the truth and will do what they say – even if you disagree strongly.

Our ability to operate as a society governed by rules and norms is eroding because we are losing one of the most foundational aspects we require – the ability to trust each other’s word.

As the nation listened to President Trump speak Tuesday, I was reminded of Michelle Obama’s line, because President Trump’s word rarely seems to be his bond and he constantly changes what he says he’s going to do – sometimes from hour to hour, often from day to day and week to week.

President Trump says he likes to be unpredictable. He certainly is.

The problem is that in elected office, a person’s most valuable currency is his or her word. There’s never been a time – and never will be – when every decision-maker in this country agrees on everything. This is a strength of our democracy. Through debate and disagreement, we are more likely to consider a variety of views and reach the best outcome.

However, no one can negotiate with someone whose position is constantly shifting – it’s like trying to build a skyscraper on quicksand. And if you can’t negotiate, you can’t get anything done that requires approval by more than a single person.

How will anything the president outlined in his State of the Union address get done if people in Washington think the president’s position might shift from moment to moment? How will our allies and enemies across the world engage diplomatically with the United States if our leader’s words are likely to be undermined by his next tweet or insulting comment?

To be sure, the stereotype of the lying politician is one as old as politicians themselves. And politicians are widely despised for their ability to shift positions by slyly drawing distinctions where there are few differences.

But there has always been a breaking point in regards to how much presidential dishonesty Congress will put up with. For example, after President Clinton stated that “I did not have sexual relations with that woman” he was impeached – though not convicted. And President Nixon resigned when faced with impeachment for lying about his role in the Watergate scandal.

However, our current Congress is of the same party as the president, and Republicans seem reticent to stand up to him for fear of angering their base voters. It remains to be seen whether this will change.

Still, even with their dishonesty, both Presidents Clinton and Nixon successfully led negotiations on many bipartisan pieces of legislation with congressional leaders and negotiated consequential diplomatic agreements with foreign nations as well. The reason they were able to strike a deal is because when it came to their jobs as president, they understood the need to uphold their end of the bargain.

It is uniquely Trumpian for a president to have such flexible positions that he abdicates his role in providing legislative leadership to his party in negotiations, as we saw during the negotiations over immigration during the government shutdown and on talks dealing with the Affordable Care Act (ObamaCare).

I can only imagine how frustrated those who consider themselves President Trump’s allies are when he shifts a position. How do you follow a person who is too indecisive to lead?

There were many policy goals outlined in President Trump’s State of the Union address that I disagree with, some that could be interesting depending on implementation, and a few that I support.

But whether you support President Trump’s ambitions is almost beside the point. The larger and more troubling question is whether he will be consistent in his positions and steadfast when negotiating to achieve them.

The fish rots from the head, as Ezra Klein pointed out in a recent piece in Vox. And unfortunately, President Trump’s example of flipping and flopping on issues – and denouncing reporting he disagrees with as “fake news” – signals to other members of the Republican Party what is acceptable, or at least tolerated, behavior in American politics. It is not only limiting his ability to get things done, it is corrosive to the nature of our democracy.

Our ability to operate as a society governed by rules and norms is eroding because we are losing one of the most foundational aspects we require – the ability to trust each other’s word.

Republicans rule in Washington now, controlling the White House, the Senate and House of Representatives. What are they going to do with their power, besides enacting a tax cut that limits government’s ability to fund the programs it’s supposed to run while benefiting the wealthiest Americans?

Will Republicans continue to sow chaos and confusion or will they build a prosperous future with dignity for all Americans, as President Trump promised in his State of the Union?

One thing is certain – to do the latter, President Trump and Republicans in Congress will have to learn to embrace the values of honesty and standing behind their word that were so clearly stated by Michelle Obama.

If Republicans don’t follow the former first lady’s example, it won’t be possible to get much done.

Aditi Juneja is on the Forbes 30 Under 30 List for 2018 in Law and Policy. She is the co-founder of the Resistance Manual and OurStates.org. She also created and hosts the "Self-Care Sundays" podcast. She is a graduate of NYU School of Law.