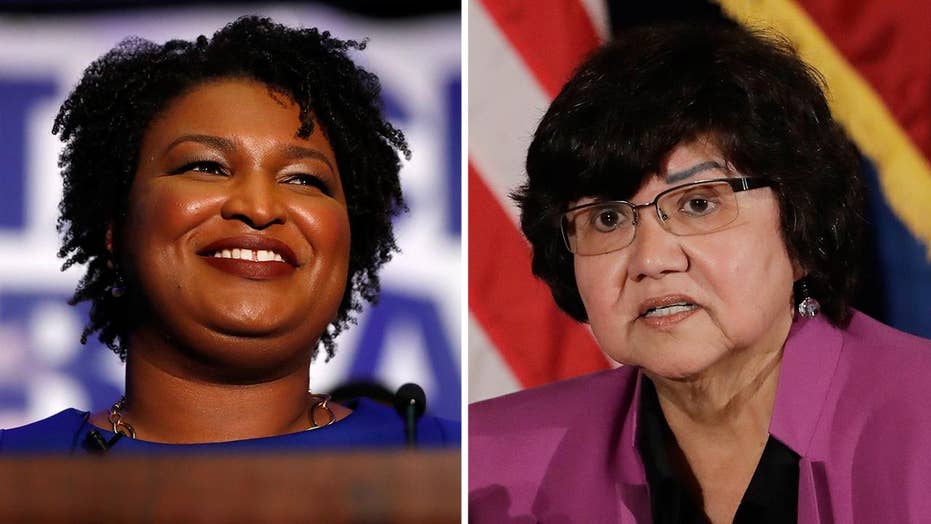 As the Democratic Party struggles to find its identity this primary season, it’s clear that Tuesday’s contests continued to show the internal struggle for the party’s future direction.

The results speak volumes: progressives are overwhelmingly beating their more moderate primary opponents and uncertainty remains around the Democratic Party’s ability to retake the House in November

The growing progressive insurgency presents serious questions for the Democratic Party as it continues its leftward movement.

Progressives are overwhelmingly beating their more moderate primary opponents and uncertainty remains around the Democratic Party’s ability to retake the House in November.

In particular, two gubernatorial primaries demonstrated the tension between progressives and moderate candidates who are arguably more electable in November.

Abrams, who is now one step closer to becoming the nation’s first African-American female governor, notably received an endorsement from former presidential nominee Hillary Clinton, who recorded a robocall on her behalf.

Abrams is also backed by independent Sen. Bernie Sanders of Vermont, Clinton’s rival for the Democratic presidential nomination in 2016, along with his progressive super PAC, Our Revolution.

Cindy Benton celebrates after voting in the Arkansas primary election on Tuesday, May 22, 2018 in Little Rock, Ark. The Democratic and Republican parties held elections Tuesday, while all registered voters were allowed to vote in judicial elections. (AP Photo/Kelly P. Kissel)

On the Republican side in the race for governor of Georgia, Lt. Gov. Casey Cagle and Secretary of State Brian Kemp advanced to compete against each other in a July 24 runoff. They were the two finishers in a field of six Republican candidates.

Moving west, Texas’ gubernatorial race also showed signs of the Democratic base favoring a progressive over a moderate.  Progressive Lupe Valdez, the state’s first Latina sheriff, defeated moderate Andrew White, who was known for his appeal to suburban voters and personal opposition to abortion.

In terms of congressional primaries, Georgia’s 6th District in suburban Atlanta – where Republican Karen Handel won last year in a special election that was the most expensive in House race in history – will see a Democratic runoff in June to compete against her in November. Moderate former TV news anchor Bobby Kaple, who supports prudent changes to the Affordable Care Act, will face community activist Lucy McBath, a proponent of gun control and the mother of a son who was shot and killed.

Another primary pitting moderate and progressive Democrats against one another played out in Kentucky’s Lexington-based 6th District, where has been held by Republicans since 2012. The national party recruited Lexington Mayor Jim Gray to run for the Democratic nomination, but Marine Corps veteran and first-time candidate Amy McGrath won by a considerable margin

In November, McGrath will face three-term incumbent Republican Rep. Andy Barr, who most recently won reelection in 2016 by more than 20 points.

There were, however, three consequential elections in which moderate Democratic candidates prevailed. These elections, all in Texas, took place in three of Texas’ 23 Republican-held congressional districts where Hillary Clinton beat President Trump in 2016.

Perhaps the most critical race that epitomized the growing civil war within the Democratic Party between moderates and the emboldened progressive faction took place in Texas’ 7th District in the Houston suburbs. Moderate Democrat and former attorney Lizzie Panill Fletcher defeated Our Revolution-endorsed progressive Laura Moser.

Despite controversy surrounding the involvement of the Democratic Congressional Campaign Committee (DCCC) in this race and its decision to release opposition research against Moser, Fletcher overcame the insurgent Moser and will now face potentially vulnerable Republican incumbent John Culberson in November.

In Texas’s 23rd District, occupying a large swath of west Texas along the U.S.-Mexican border, DCCC-endorsed Gina Ortiz Jones beat out the severely underfunded Rick Trevino, an activist and former Bernie Sanders delegate backed by the Sanders-affiliated group Our Revolution.

Overall, Tuesday’s results prove that the problematic trend of far-left progressives winning Democratic primaries over moderate centrists continues, showing that the party is more divided than ever.

It is time to move forward with a plan that unifies, rather than divides the party, or squander the opportunity to retake either chamber of Congress in November.