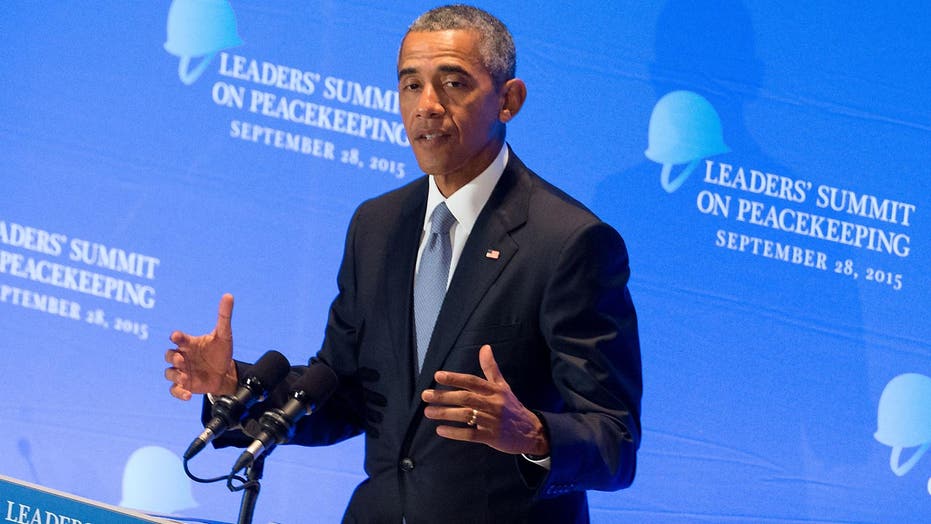 President Obama attempts to save face on Syrian conflict

President Obama was widely criticized last year after he claimed Russia intervened in Ukraine “not out of strength, but out of weakness” since it was obvious Russian President Putin decided to meddle in Ukraine because he believed President Obama’s weak foreign policy guaranteed that the United States would do nothing to stop him.

Mr. Obama’s claim that Russia meddled in Ukraine out of weakness was ridiculous.  The president doubled down on this nonsensical claim in a "60 Minutes" interview with Steve Kroft broadcast on Sunday when he said Putin's military mission in Syria is a sign of Russia's weakness, not a show of Putin’s leadership.

It was a painful interview to watch as the leader of the free world spoke about his disastrous foreign policy as if he lived in a fantasy world.

Mr. Obama claimed successes against ISIS because the U.S. reportedly “took away key land,” pushed it back in Iraq and disrupted some ISIS operations in Syria.

It was a painful interview to watch as the leader of the free world spoke about his disastrous foreign policy as if he lived in a fantasy world.

The president said a policy he announced last September to “degrade and destroy” ISIS would work “over time,” not in one year.  Mr. Obama also said he was confident the nations of the world would come together “over time” to defeat ISIS.

Mr. Kroft, clearly exasperated by this stream of statements with no basis in reality, insisted that Vladimir Putin is not, as Mr. Obama asserted, acting out of weakness but was challenging his leadership.

The president disputed Mr. Kroft by saying, “Well, Steve, I got to tell you, if you think that running your economy into the ground and having to send troops in, in order to prop up your only ally is leadership, then we've got a different definition of leadership.”

The president added to this by explaining what he considers the marks of U.S. global leadership under his administration: leading in climate change and bringing about the nuclear deal with Iran.

When Mr. Kroft told Mr. Obama that many people – including Israel, Saudi Arabia and congressional Republicans -- believe the U.S. is in retreat under his presidency, the president blamed this charge on partisan politics and attacked Republicans for believing the only solution to Middle East instability is sending hundreds of thousands of troops.

The president also repeated his line that the people who oppose his Middle East policy are the same ones who got the U.S. into the Iraq War.

President Obama concluded his discussion of foreign policy by telling Mr. Kroft that that America is a safer place today because of a reduced threat of terrorism, that U.S. strategic alliances are stronger, and America has a better reputation around the world.

I believe one explanation for Mr. Obama’s comments to Mr. Kroft is that his Syria/Iraq policy is actually a non-policy to do a little as possible about these crises so he can hand them to the next president to solve.  I discussed this in a May 28, 2015 Fox News.com opinion article.

But overall, President Obama false and ridiculous statements in his "60 Minutes" interview about global security issues and his failed foreign policy is why the world does not view him as a serious president.

The world knows America is in retreat under the Obama presidency.  It has learned that the word of this president means nothing. This is why Putin ignored the United States and intervened in Ukraine and Syria. This is why the threat from ISIS and global terrorism is growing. This is why China is expanding its efforts to control the South China Sea.

And this is why, with America’s global reputation plummeting, the world may be a much more dangerous and unstable place 15 months from now when Barack Obama leaves office.