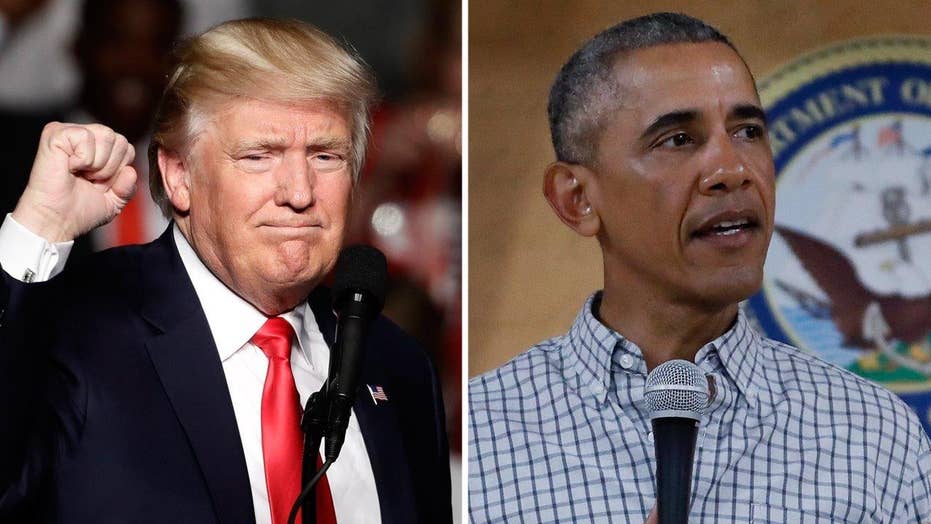 Could Obama beat Trump in the 2016 election? 'The Factor' debates.

From start to finish 2016 was defined by one story – Who Will Be the Next President of the United States? While the search for Number 45 might have dominated most news cycles, it was not the only political story of interest to make headlines. Below is a look at the top 16 numbers that dominated the political news over the last year.

0: Number of times Hillary Clinton visited Wisconsin during the general election. This was a very poor strategy on the part of the Clinton team. In the end, Wisconsin proved to be one of three key “blue wall,” Rust belt battleground states. Wisconsin, along with Michigan and Pennsylvania, cost the Democratic party the 2016 election.

5: Number of times in American history that the winner of the popular vote has lost the Electoral College. It happened this year when Clinton was awarded 2.8 million votes more than Trump, but lost the Electoral College (304-227). Prior to that it had only happened four times in U.S. history: 1824 (Jackson v. Adams), 1876 (Tilden v. Hayes), 1888 (Cleveland v. Harrison), and 2000 (Gore v. Bush).

8: Number of justices on the Supreme Court since Associate Justice Antonin Scalia passed away earlier this year. President Obama swiftly appointed Merrick Garland to fill the vacant seat, however Republicans resisted taking up his confirmation choosing instead to wait until after the election. This now gives President-elect Trump an opportunity to name Scalia’s replacement, almost immediately, on taking office. Additionally, considering the ages of the more liberal members of the bench, opens up the prospect for Trump in the coming four-year term to shift the ideological balance on the Supreme Court in a dramatic way.

33: Number of governorships that Republicans control. This is a record and indicative of how dominant the GOP is, not only at the federal level, but across the country as well where they control 4,171 of 7383 state legislative seats. Republicans now control both the state legislature and governorships in 25 of 50 states, while Democrats have just 12.

49: Number of people killed at the Pulse nightclub in Orlando when a gunman opened fire in late June. There were also 53 people who were wounded in the attack, making it the worst mass shooting in U.S. history, and the deadliest terror attack on U.S. soil since September 11th, 2001. During the three-hour standoff the gunman pledged allegiance to the Islamic State, sparking tremendous debate about ways to combat terrorism, homegrown terrorism, gun control, mental illness, mental health funding, and open borders.

51.9: Percent of Britons who voted in June to leave the European Union. The inexorable outcome of the Brexit vote which resulted in the resignation of a British Prime Minister, and astounded pundits and prognosticators who, up until the results were announced, were convinced that “stay” would win the day.

85: Percent chance, according to the New York Times that Clinton would defeat Trump. The Times was not alone in their miscalculation, the Huffington Post gave Clinton a 98 percent chance of winning, Princeton Election Consortium’s forecast gave her 99 percent and Nate Silvers FiveThirtyEight website predicted an approximately 71 percent chance of a Clinton win.

88: Number of years since a U.S. president had visited Cuba. President Obama’s promise to re-establish ties with the nation culminated in a historic visit this year. One which garnered praise from some quarters and denunciations from others, particularly those of Cuban descent who are opposed to relations with the Castro regime. In late November, several months after his visit, the 90-year old former dictator Fidel Castro passed away.

309: Number of people arrested for protesting against police shootings of black men in late August. The protests erupted in cities across the country in response to the killings, one day apart, of Alton Sterling and Philando Castile. Days later, a gunman killed five police officers at a Black Lives Matter rally. Officers were also subject to attack at rallies in Tennessee, Missouri, and Georgia. These incidents renewed the debate across the nation over police-community relations, policing practices, and the Black Lives Matter movement.

1,000: Number of Democratic seats lost during President Obama’s eight years in office. Yet Obama himself remains popular with approval ratings similar to those of Clinton and Reagan when they left office. Either way he leaves the Democratic Party weakened at the local, state, and national levels. The strength of their bench matters when it comes to potentially recapturing the White House, Senate or House. Another mark of their bench challenge? Governors make good candidates for the presidency, right now Democrats have only 16, which means Republicans have almost double the amount of talent to draw on.

6,500: Number of Clinton Campaign Chairman John Podesta’s hacked emails were released by WikiLeaks as of mid-October. The emails revealed some embarrassing information about the party and led to the resignation of its Chairwoman, Florida Rep. Debbie Wasserman Schultz. The CIA and Obama administration claim that Russia, in an attempt to throw the election to Trump, was behind the hacking. As of late December some key Republicans in the Senate have joined Democrats in calling for an investigation and the Obama administration has vowed to retaliate.

16,000: Number of casualties estimated to have died as a result of violent ideological extremism worldwide. This includes approximately 1,800 separate terrorist attacks around the globe including in Nice, Kabul, Pakistan, Brussels and Yemen. Various groups have claimed responsibility for these attacks including Islamic State of Iraq and the Levant (ISIL), Al-Qaeda, Boko-Haram, Jamiat-i-Islamiyah, Jamaat-ul-Ahrar, Al-Shabaab, and Lashkar-e-Jhangvi.

33,000: Number of emails Clinton was accused of having destroyed (by Trump and others) after receiving a subpoena. The FBI investigated Clinton’s use of a private email server during her time as Secretary of State. Director James Comey was critical of Clinton’s use of the server but during the summer said he would not recommend pursuing criminal charges. Months later and just 12 days before the election, Comey sent a letter to Congress stating they had discovered more emails that were potentially relevant to the investigation. Despite later clearing her once again, after the election many Democrats saw this as critical to her loss.

400,000: Number of casualties in the Syrian War as estimated by the United Nations and Arab League Envoy to Syria. Other estimates range from as low as 312,000 to as high as 470,000 – this includes civilians, women, children, rebels, and government forces. As of late December the Syrian government had recaptured all of Aleppo from the rebels, their biggest victory of the almost 6 year civil war. Days later Syria agreed to a cease fire brokered by Russia and Turkey, the first since a cease fire in September which collapsed after a week.

18.1 Million: Number of people who follow @realDonaldTrump on Twitter. As both, a candidate and now president-elect, over the last year, Trump has redefined what it means to go over the head of the press and to reach people directly. After the election he credited Twitter with helping lead him to victory and described it as “tremendous, it’s a modern form of communication. There should be nothing we should be ashamed of.”

$6.9 Billion: Estimated total cost of the 2016 election for both Congress and the presidency. This makes it the most expensive race in American history. In the race for the Presidency alone, the election cost approximately $2.651 billion. However money didn’t rule the day, Clinton outspent Trump almost two-to-one only to go on to lose the election.

Jeanne Zaino, Ph.D. is professor of Political Science and International Studies at Iona College and Senior Advisor at AppliedTechonomics, Public Sector. Follow her on Twitter @JeanneZaino.