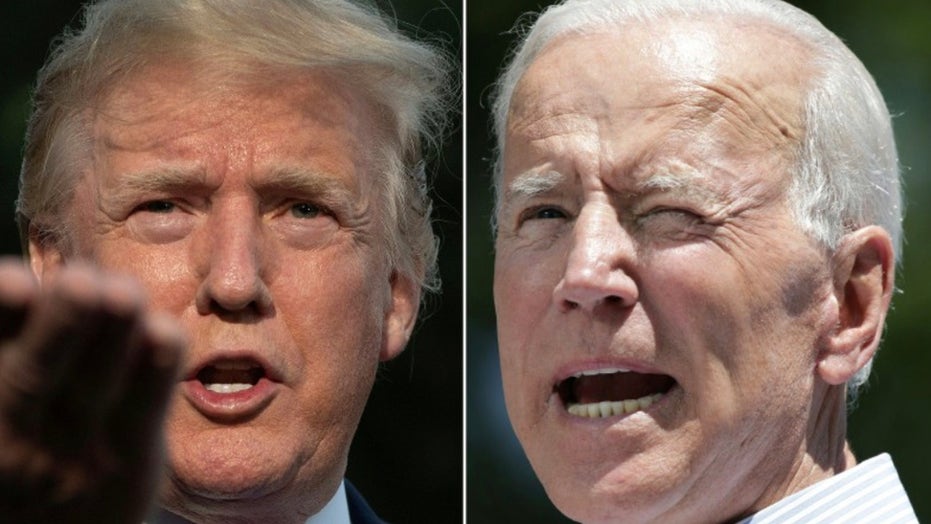 Democrat Joe Biden is ahead in three key states that President Donald Trump won in 2016, according to new Fox News statewide surveys of Arizona, North Carolina, and Wisconsin.

Support for reelecting Trump falls below his 2016 vote share in each state.  At the same time, there’s room for improvement, as more voters approve of his job performance than back his reelection.

Interest in the election is roughly the same among both Biden and Trump supporters.

In all three states, a sizeable number of voters plan to cast their ballot by mail -- and in each state, many more Democrats than Republicans plan to do so.

While Election Day is two months away, voters can request and return absentee ballots starting this week in North Carolina and mid-September in Wisconsin.  In Arizona, absentee ballots are available early October.

Here are the state-by-state results:

Biden is preferred over Trump by 49-40 percent among likely voters in Arizona.  That 9-point lead is outside the margin of error.  The Libertarian ticket headed by Jo Jorgensen receives 3 percent and 6 percent are undecided.

Trump won Arizona with 48.7 percent in 2016, topping Hillary Clinton by three and a half percentage points.  Currently, a 56 percent majority disapproves of the job he’s doing as president (43 percent approve).

In addition, Biden is ahead among suburban women (+15) and suburban voters overall (+7).

Trump is ahead among Whites without a college degree (+11 points) and Gen Xers (+5).  White voters overall split 45-45 percent.

More Arizona likely voters trust Biden than Trump to handle coronavirus by 17 points.  They also trust Biden to handle policing and criminal justice by a smaller 5-point margin.  The two rate about evenly on the economy (Trump +1) and dealing with China (Biden +1).

More Trump supporters are ticket splitters, as 89 of his backers support McSally, while 96 percent of Biden backers go for Kelly.

Some 14 percent of Republicans support Kelly vs. 3 percent of Democrats going for McSally.

In North Carolina, Biden holds a narrow 4-point margin among likely voters (within error margin).  He receives 50 percent to Trump’s 46 percent, while 1 percent go for Jorgensen and 2 percent are undecided.

Here’s why the race is tight.  Whites back Trump by 23 points, while Blacks support Biden by 83 points.  Men go for Trump by a 2-point margin, while women prefer Biden by 10.  And rural voters pick Trump by 14 points, while suburban areas go for Biden by 19 (among suburban women that grows to a 31-point lead).

The president receives strong backing from Whites without a college degree (+33) and White women (+19).

In 2016, Trump won the Tar Heel State by nearly four points, receiving 49.8 percent of the vote.  About the same number are happy with him today: 49 percent approve of the job he’s doing as president, while 50 percent disapprove.

Voters see Trump as better on the economy (by 8 points) and dealing with China (+5), while more trust Biden on coronavirus (+9).  The two are about equally trusted to handle policing and criminal justice (Trump +1).

The largest number, 40 percent, say coronavirus is “not at all” under control, and those voters prefer Biden by a 70-point spread.

Democrat Cal Cunningham has a 48-42 percent edge over Republican incumbent Sen. Thom Tillis among North Carolina likely voters.  Cunningham’s advantage is within the survey’s margin of error.  Five percent back a third-party candidate and 5 percent are undecided.

Women make all the difference in the Badger State.  They favor Biden by 17 points, while men are about evenly divided (Trump +1).  Plus, more Democrats (95 percent) support Biden than Republicans (86 percent) back Trump.

The president is ahead among rural voters (+4) and Whites without a college degree (+5).

Biden benefits from more voters trusting him on coronavirus and policing/criminal justice.  He is preferred over Trump on the virus by a wide 17-point margin and by 5 points on policing and criminal justice.  Voters rate both equally on the economy and pick Trump by only 1 point on dealing with China.

On Tuesday, the president visited Kenosha, Wisconsin, where the police shooting of Jacob Blake has prompted both peaceful and violent protests, and where police have charged a teenage gunman in the deaths of two protesters.

Nearly half of Wisconsin voters, 45 percent, feel coronavirus is “not at all” under control, and that group picks Biden over Trump by 84-10 percent.

If elected, Biden would be the second Catholic president (President John F. Kennedy being the first).  The vote preference among White Catholics in Wisconsin divides 47-47 percent, while the smaller subgroup of White evangelical Christians goes big for Trump (+33 points).

Conducted August 29-September 1, 2020 under the joint direction of Beacon Research (D) and Shaw & Company (R), these Fox News surveys include interviews with 772 Arizona likely voters, 722 North Carolina likely voters, and 801 Wisconsin likely voters randomly selected from statewide voter files, who spoke with live interviewers on landlines and cellphones. In all three states, the margin of sampling error is plus or minus 3.5 percentage points for the total sample of likely voters. Arizona respondents could complete the interview in English or Spanish.