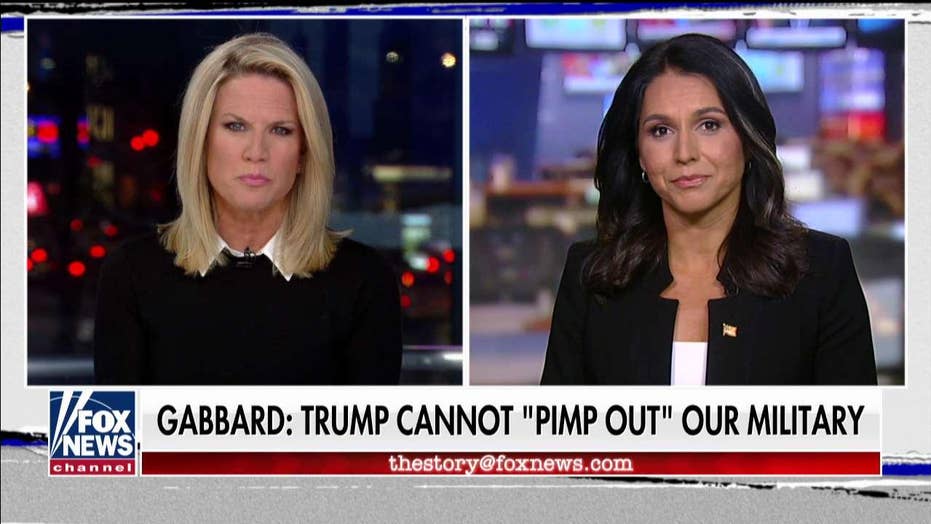 Rep. Tulsi Gabbard on how she would handle Iran

Democratic presidential hopeful Rep. Tulsi Gabbard, D-Hawaii, said Thursday that she would re-enter the Iran nuclear deal and end sanctions in response to Iran's involvement in drone attack against Saudi Arabia oil facilities if she was president.

"What I would do is, I would re-enter the Iran nuclear deal to prevent Iran from continuing to move forward in building a nuclear weapon that puts us and the world further at risk," Gabbard said on "The Story with Martha MacCallum." "

And number two... end those crippling sanctions. Every day that we don't do this, every day we continue down this failed strategy Iran gets closer and closer to a nuclear weapon. That's a fact."

LOCKED AND LOADED: MILITARY OPTIONS ON TABLE IN RESPONSE TO SAUDI OIL ATTACK AS TRUMP SEEKS TO AVOID WAR 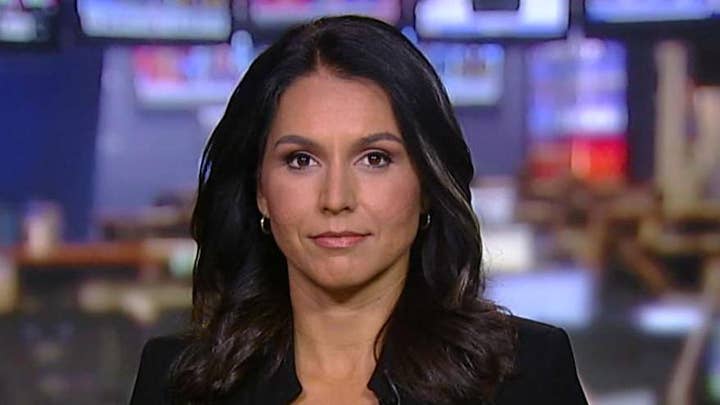 U.S. officials told Fox News on Tuesday that Iranian cruise missiles and drones were both used in the attack on the two Saudi Arabian oil facilities, and that they were fired from inside southwest Iran this past weekend.

Gabbard called the attack a "retaliation" against "extreme sanctions."

"This this provocation, as you put it, did not just come from out of nowhere, "Gabbard said, responding to MacCallum. "It is a retaliation and it's a retaliation against the extreme sanctions that are on Iran that's basically making it impossible for them to sell their oil around the world."

The congresswoman also doubled down on her criticism of the president for a tweet he made regarding Saudi Arabia.

Trump tweeted Sunday that the U.S. was “waiting to hear from the Kingdom as to who they believe was the cause of the attack, and under what terms we would proceed!”

“Trump awaits instructions from his Saudi masters,” Gabbard tweeted in response. “Having our country act as Saudi Arabia’s b---- is not ‘America First.’”

Gabbard had earlier ramped up her rhetoric against the president on Tuesday by comparing him to a "pimp."

“My fellow service members and I, we are not your prostitutes and you are not our pimp,” Gabbard, a member of the National Guard, tweeted.

MacCallum pressed Gabbard on if she misinterpreted Trump's tweets.

"I took an oath to support and defend our Constitution to protect and defend the American people, not the kingdom of Saudi Arabia, not any other foreign power," Gabbard responded before saying it was on Trump to clarify. "Now if for some reason that's not what Trump meant then he should come out and say that's not what I meant and clarify. But he hasn't done that."

Gabbard criticized Saudi Arabia and their ties to al-Qaeda.

"We're talking about a country that is continuing to, directly and indirectly, support al-Qaeda," Gabbard said.