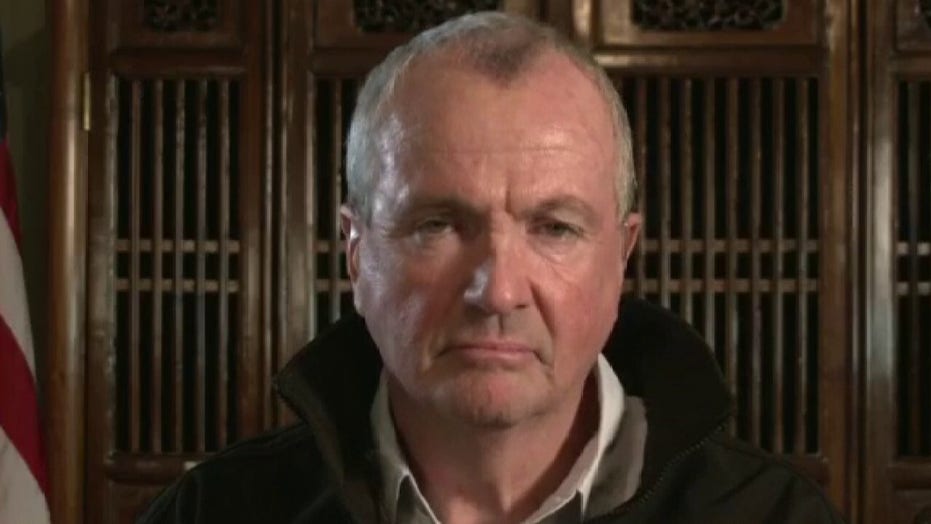 Tucker Carlson pressed Democratic New Jersey Gov. Phil Murphy Wednesday on the scientific rationale and constitutional fitness of Murphy's executive measures in response to the coronavirus pandemic, which have essentially locked down most of the Garden State.

Murphy's orders have included the closure of all state parks and a ban on large gatherings. New Jersey had more than 71,000 confirmed coronavirus cases as of Wednesday night and 3,156 deaths, more than any other state except New York.

Host Tucker Carlson drew Murphy's attention to a widely publicized case in which 15 men were arrested for congregating at an Ocean County synagogue earlier this month, violating Murphy's ban on large gatherings and his stay-at-home order.

'The Bill of Rights, as you well know, protects Americans' rights — enshrines their right to practice their religion as they see fit and to congregate together to assemble peacefully," Carlson said. "By what authority did you nullify the Bill of Rights in issuing this order? How do you have the power to do that?"

"That's above my pay grade, Tucker," Murphy responded. "I wasn't thinking of the Bill of Rights when we did this ... we looked at all the data and the science and it says people have to stay away from each other. That is the best thing we can do to break the back of the curve of this virus, that leads to lower hospitalization and ultimately fatalities."

"Since you are an elected official, a leader in the government, an executive, how do you have the authority to order something that so clearly contravenes the Bill of Rights of the United States – the U.S. Constitution – where do you get the authority to do that?" Carlson asked again

"Well, here's the thing," Murphy answered. "We know we need to stay away from each other, number one. Number two, we do have broad authority within the state. And number three, we would never do that without coordinating, discussing, and hashing it out with the variety of the leaders of the faiths of New Jersey."

The governor said he spoke about the ban with Joseph Cardinal Tobin, the Archbishop of Newark, as well as other leaders of faith. Murphy said Tobin understood his concerns amid the Easter season and agreed that the diocese would not be holding drive-thru Holy Communion or other services in order to protect congregants.

Murphy added that he was not denying anyone the right to worship but that amid the pandemic, "we have to find a different way to worship."

"I think that's the point," the governor added. "God Bless America, willingly, but let's do it in a different way."

Carlson again pressed the constitutional point, telling Murphy that "you can't just, as the governor of a state, tell people who they can talk to when and where, because the Constitution of the United States – upon which all of this is based – prohibits you from doing that, so you clearly decided that you could do it."

The Philadelphia Inquirer reported that the men were charged with violating Murphy's order after attending an Orthodox Jewish funeral April 1 in Lakewood.

Lakewood, located about 70 miles east of Philadelphia, saw law enforcement called to disperse several similar gatherings in March, the paper reported, adding that one case involved a 25-strong gathering at a school whose headmaster was hit with charges of maintaining a nuisance.

Earlier in the interview, Carlson raised the case of a man who was cited for walking on a beach, as well as the fact that liquor stores remain open in the state and asked Murphy what "science" determines which businesses can stay open.

Murphy said there would be unintended consequences from shutting down liquor stores and noted that he had spoken with addiction coaches on the matter.

When asked about the state park closures, Murphy said there were issues with "out of state license plates" showing up at parks, attracting larger crowds than the social distancing guidelines allowed.