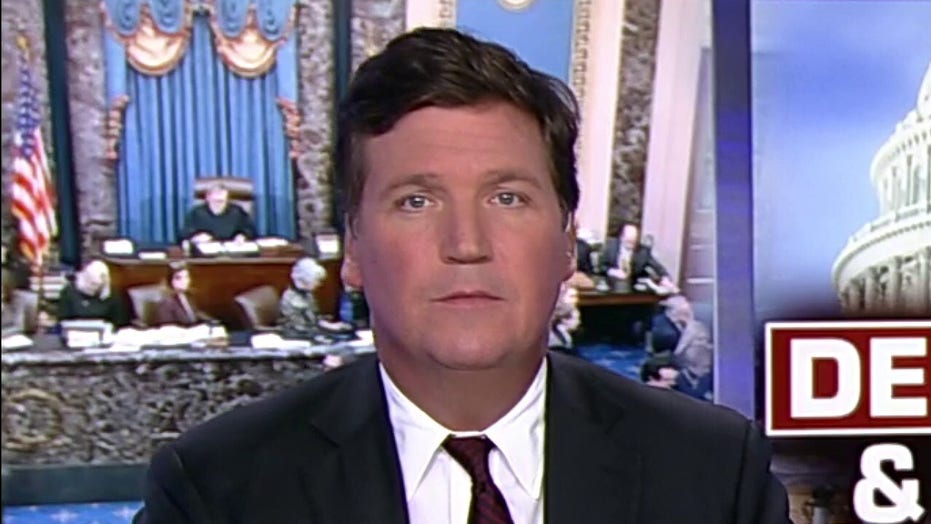 Reality sets in for lawmakers in Washington.

Tucker Carlson criticized Democrats and the media for their behavior during the Senate impeachment trial of President Trump Friday, saying "the process continues on like a ghost ship."

Carlson opened his program by playing clips of people fighting during a bridal sale and on Jerry Springer's television show before playing a clip of Rep. Jerrold Nadler, D-N.Y., hustling past Rep. Adam Schiff, D-Calif., in order to speak at the end of Thursday night's question-and-answer session.

"These people are buffoons," Carlson declared. "That clip really was the whole impeachment from start to finish. Narcissistic, degrading, pointless. A nation as great as this one deserves more, but that would require impressive leaders at some point.

"Maybe next week we'll look back on this whole chapter in shame. But for a few more days at least, the hysteria will continue," Carlson said. "In fact, it will likely increase, believe it or not."

"Imagine Donald Trump deciding sometime in June, 'Well, I heard this conspiracy theory that a whole lot of illegal immigrants voted in California,'" Johnson said on MSNBC. "'So I've decided that during the presidential election, California has to go under, undergo extreme vetting because we can't trust their votes. We're going to shut down voting in a state.' This is literally the kind of thing he will do now."

"Got that? Trump is, 'literally' going to cancel the election in California, our biggest state," Carlson said. "... The press and the Democratic Party allowed their fantasies to overstep reality, but they're about to be shocked back to consciousness very soon."

"The Democratic Party is in trouble," Carlson warned. "It's about to collide with itself."

"They wasted their energy on wild conspiracies about Russia and Ukraine," Carlson added. "And while they were doing that, their unhappiest but most energetic activists forced their candidates to take lunatic positions on abortion, guns, race, gender, climate, you name it, positions that are way out of the mainstream, even among Democrats."