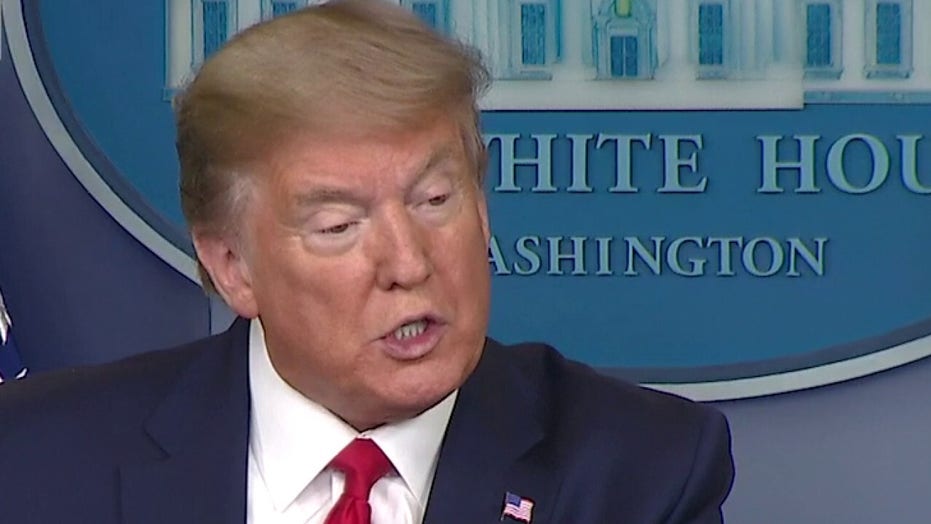 President Trump defends his response to coronavirus crisis: We were way ahead of schedule

President Trump sparked plenty of reactions at Monday's coronavirus briefing with a rare video presentation featuring members of the media downplaying the outbreak leading up to the national crisis.

Trump, who repeatedly has defended his handling of the pandemic, showed a montage of the media's initial takes on the coronavirus outbreak, featuring clips from ABC News, NBC News and CBS News journalists and commentators expressing more concern about the flu than the disease that was plaguing China at the time.

The montage boasted the "decisive action" the president took with a timeline featuring his founding of the coronavirus task force, the travel restrictions on China and Trump's call to "accelerate" development for a vaccine for the virus in early March.

He then highlighted criticism he received from former Vice President Joe Biden and House Speaker Nancy Pelosi, D-Calif., by playing an audio clip from New York Times reporter Maggie Haberman, who acknowledged that it was "probably effective." Haberman later tweeted that the audio was "misleading."

That was followed by public remarks made by several governors, including Andrew Cuomo, D-N.Y. and Gavin Newsom, D-Calif., all praising the Trump administration's response to their states' needs.

"We could give you hundreds of clips just like that. We have them," Trump told reporters after the video finished. "It's very sad when people write false stories." 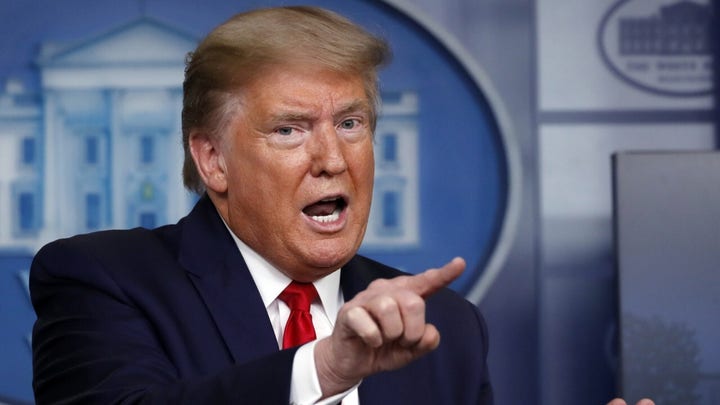 ABC News White House correspondent Jonathan Karl asked Trump who produced the video, which Karl described as something like a "campaign ad." The president credited a "group in the office" headed by White House social media director Dan Scavino.

"Why did you feel the need to do that?" Karl asked.

"We're getting fake news and I would like to have it corrected," Trump responded, later saying, "I don't mind being criticized, but not when they're wrong."

Both CNN and MSNBC cut out of the briefing as the montage was underway but returned moments later. CNN, however, offered several editorialized graphics during the briefing including, "Angry Trump turns briefing into propaganda session," "Trump uses task force briefing to try and rewrite history on coronavirus response," and "Trump melts down in angry response to reports he ignored virus warnings."

Many members of the media took to social media to criticize the president.

"WH just played what appeared to be a campaign video defending Trump. In the briefing room. Just like a rally," CNN reporter Jim Acosta reacted.

"I stood behind that podium for two years and never engaged in anything close to what we saw today. This is North Korea type propaganda. We have a President who cares only about himself and not about Americans," former Clinton press secretary-turned-CNN analyst Joe Lockhart wrote.

"The fact that we have to debate whether or not to air a propaganda and disinformation briefing says a lot about why America was uniquely poorly suited to handle this pandemic in the first place," former Obama adviser and MSNBC analyst Ben Rhodes wrote.

Others praised the president for showing aggression toward the hostile media.

"The White House press corps are literally melting down right now after @realDonaldTrump is calling them out. It's pretty bizarre to listen to. Good for the President on this. These media members have a tendency to take sides while pretending to be reporters," radio host Jason Rantz said.

"The mainstream media is melting down because @realDonaldTrump showed them clips of their own coverage," Republican National Committee chairwoman Ronna McDaniel wrote.