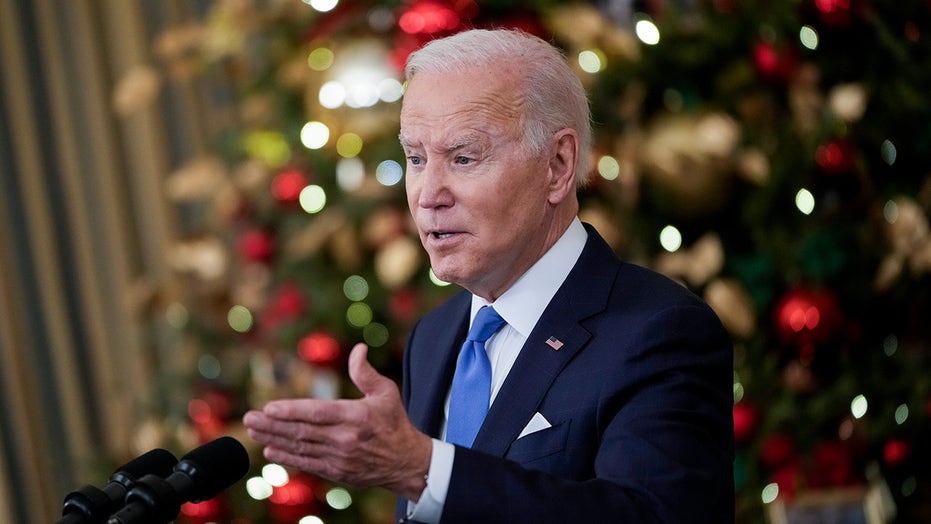 Atlantic writer David Frum managed to find a win for President Biden this year following the loss of a key vote on Build Back Better from Sen. Joe Manchin, D-W. Va.

Manchin's opposition to the bill ended for now Biden's chances of passing his multi-trillion spending package in a 50-50 Senate. But Frum found an upside, suggesting he fared better in 2021 than some of his predecessors in their first years.

BIDEN DECLINES TO SAY WHETHER MANCHIN BROKE HIS COMMITMENT

The author suggested that compared to past presidents who faced a combative Congress, Biden has proved to be on better footing.

"Relative to its strength in Congress, the Biden administration has proved outstandingly successful," Frum wrote, citing the president's coronavirus relief bill and $1,400 stimulus payments for Americans, and his signing of an infrastructure bill last month.

President Joe Biden speaks to reporters as he departs for tornado-ravaged Kentucky from the White House on Dec. 15, 2021. (REUTERS/Kevin Lamarque)

Biden is in better shape than even President Obama, Frum argued, because moderate Democrats like Manchin, despite his impactful opposition to Build Back Better, have tended to show more loyalty.

"Anybody can win a poker game with a good hand. It takes a real maestro to play a bad one," he continued. "Biden won a bigger pool with worse cards than any Democratic president ever. He won that pool because Manchin gave Biden more loyalty under more adverse conditions than the moderate Democrats of 2009 gave to President Obama."

Democrats, Frum said, need to look at the situation as a "glass half full" scenario.

Sen. Joe Manchin is followed by reporters as he leaves a caucus meeting with Senate Democrats at the U.S. Capitol on Dec. 17, 2021. (Anna Moneymaker/Getty Images)

But with his party's hopes for passing a massive social policy bill dashed for the moment, Biden enters 2022 with little momentum, facing poor approval numbers as the country reels from a coronavirus surge and record inflation.

Pressed by a room of reporters on Tuesday, Biden left room for some optimism.

"Some people think maybe I'm not Irish because I don't hold a grudge," Biden said. "But I want to get things done. I still think there's a possibility of getting Build Back Better done."