An apology issued by the National School Boards Association for a letter sent to the Biden administration that compared some parents to domestic terrorists was "too little, too late," Parents Defending Education Nicki Neily told "Fox News Live" Saturday

Neily said NSBA "never should have sent" its letter, which requested federal assistance with opposition it deemed "equivalent to a form of domestic terrorism and hate crimes."

Shortly after NSBA’s letter reached the White House, Attorney General Merrick Garland issued a memorandum that instructed the FBI to take the lead on addressing threats against school officials.

"It raises a huge amount of questions about what kinds of coordination were happening behind the scenes, who asked for this letter and how the Department of Justice was able to turn this around so quickly," Neily said.

The apology was addressed to NSBA members, and Neily questioned whether the association would apologize to the parents who were vilified.

"What about the parents?" she asked. "What about the millions of parents who were labeled domestic terrorists by this organization? We demand an apology as well."

The takeaway from the situation, Neily said, is that the NSBA picked the wrong fight with parents upset about curricula being taught to their children.

"I think what this shows is that a $19 million trade association with direct links to the White House is no match for a group of mad moms," she said. "There is strength in numbers." 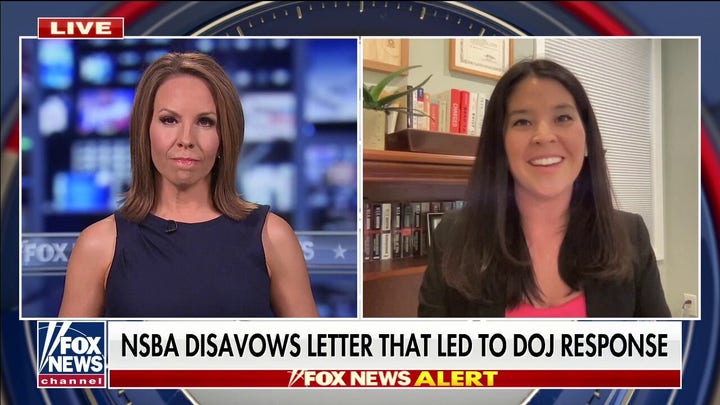 Despite actions taken both by Garland and the NSBA, Neily believes parents at the grassroots level can make real change.

"There is opposition to these ideas and how these things are being shoved down our throat. It crosses party lines, it crosses racial lines, ethnic lines, and so there is a real groundswell of opposition to what is going on, and I’m really optimistic that if people keep pushing, we can affect significant change," Neily said.

"And so, I’m very heartened by what’s going on, and I think this wave is going to continue."