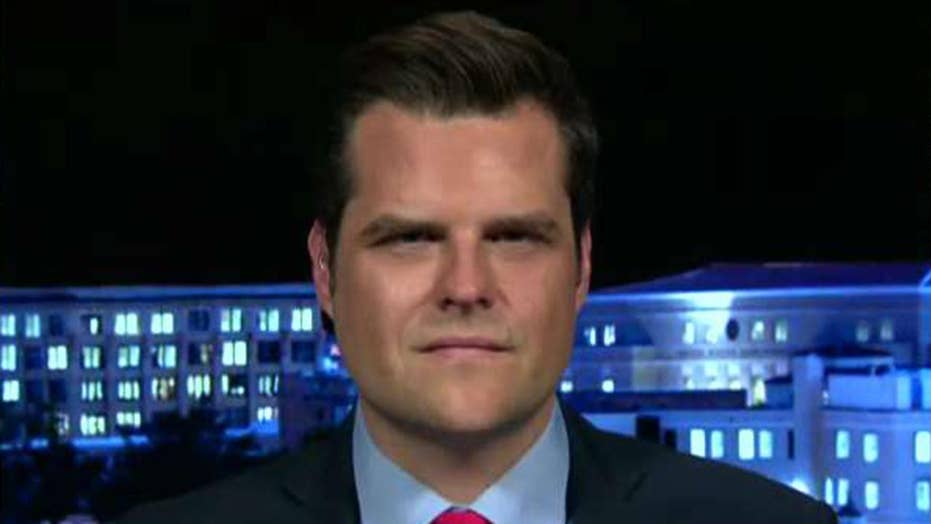 Rep. Gaetz on impeachment trial: I hope we get through this national nightmare as fast as possible

Florida Rep. Matt Gaetz on his expectations for the Senate impeachment trial on 'Tucker Carlson Tonight.'

CNN's Don Lemon lost journalistic credibility when he laughed on camera in reaction to a guest's derisive comments about supporters of President Trump, a Republican congressman said last week.

“He is like CNN’s professional eye-roller who always wants to gasp himself out of breath at everything he sees from the president,” Gaetz, a close ally of Trump, told Regan.

“He is like CNN’s professional eye-roller who always wants to gasp himself out of breath at everything he sees from the president.”

But on Saturday, Gaetz doubled down in a Twitter message, referring to Lemon as "a hack," and "not a journalist."

"The Left and the mainstream media have contempt not just for President Trump, not just for his allies in Congress, but also for the American people who support President @realDonaldTrump," Gaetz wrote in a retweet of a clip from his "Primetime" appearance.

Lemon had been roundly criticized for falling into hysterical laughter Jan.25 when a panelist on his show mocked Secretary of State Mike Pompeo for claiming an NPR reporter couldn’t find Ukraine on a map before calling Trump’s base of supporters the “credulous boomer rube demo.”

While talking about a statement Pompeo put out Jan. 25 that suggested NPR reporter Mary Louise Kelly misidentified Bangladesh for Ukraine on a blank map, former GOP strategist Rick Wilson said Pompeo "also knows deep within his heart that Donald Trump couldn't find Ukraine on a map if you had the letter U and a picture of an actual, physical crane next to it."

"He knows that this is, you know, an administration defined by ignorance of the world. And so that's partly him playing to the base and playing to their audience. You know, the credulous boomer rube demo that backs Donald Trump."

Lemon continued laughing uncontrollably as Wilson said in a mocking Southern accent: "Donald Trump's the smart one -- and y'all elitists are dumb!'"

"You elitists with your geography and your maps and your spelling!'" New York Times columnist and CNN contributor Wajahat Ali added.

Lemon addressed the issue on his show Tuesday, saying he didn’t catch everything that Wilson had said and he was not laughing at Trump supporters.

“Ask anyone who knows me, they'll tell you -- I don't believe in belittling people, belittling anyone for who they are, what they believe, or where they're from," he said. "During an interview on Saturday night, one of my guests said something that made me laugh. And while in the moment, I found that joke humorous. And I didn't catch everything that was said."

Wilson also addressed the backlash, tweeting last week that his wife and kids have started to received death threats, but he didn't apologize for what he said.

In his "Primetime" appearance, Gaetz made his case for why he believes more Americans support President Trump rather than share the view of Lemon and his panelists.

"Donald Trump isn't just leading a campaign," Gaetz told Regan, "he is presiding over a political movement. That's why we've only gained strength leading into 2020 and why this impeachment sham is only intensifying our support for our transformational president. Because in real America we see things happening that will impact our lives -- a better trade deal in our hemisphere, actually standing up to China. President Trump functionally ending our involvemnet in the Syrian civil war and not starting any new 'forever wars.'

"These elements of an American nationalist economic agenda, paired with a realistic view of the world where we kill the terrorists and actually come home to bring the resources to our country? That is going to fuel a tranformational victory in 2020.

"And you know what? After the Democrats have impeached Trump and he comes back and wins anyway? Oh, wait till we get a load of Donald Trump in his second term. I think we're going to be even more transformative."