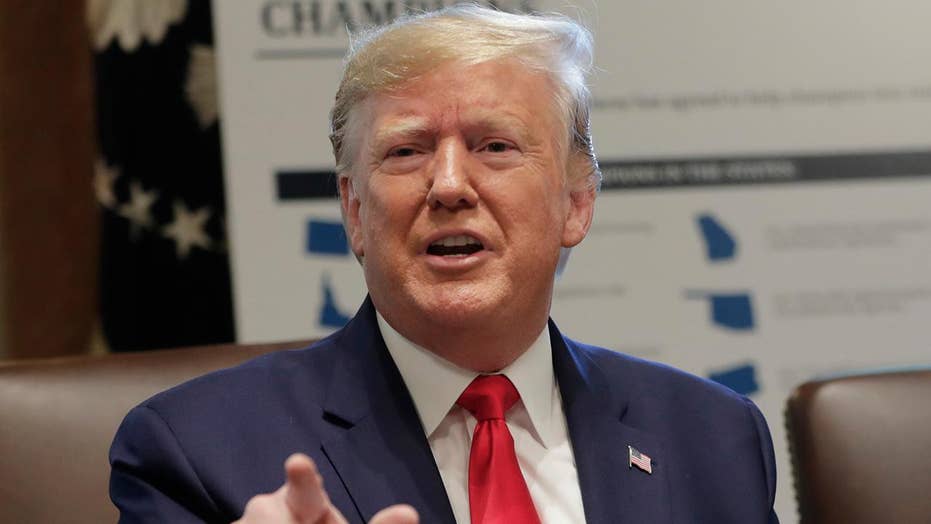 Anonymous writer who claims to be senior Trump official writing book, will give interview

A writer claiming to be a senior Trump official who penned an op-ed on resistance in the White House says they will give at least one interview on their new book.

The Justice Department on Monday demanded information on the anonymous senior Trump administration staffer behind the infamous 2018 "resistance" New York Times op-ed ahead of the mysterious author’s upcoming anti-Trump book.

Fox News confirmed that Justice Department officials asked for details on the anonymous author in a letter to the publisher on Monday, which also indicated that the secretive author could be subject to nondisclosure agreements.

"If the author is, in fact, a current or former 'senior official' in the Trump administration, publication of the book may violate that official's legal obligations under one or more nondisclosure agreements, including nondisclosure agreements that are routinely required with respect to information obtained in the course of one's official responsibilities or as a condition for access to classified information," Assistant Attorney General Joseph Hunt wrote. "Such agreements typically require that any written work potentially containing protected information be submitted for pre-publication review. Courts have approved the imposition of a constructive trust to collect the proceeds of the breach generated by an unapproved publication."

The publisher, Hachette Book Group, later replied that it received Hunt's letter but would not comply with the request to reveal any details on the author’s identity. "Hachette is not party to any nondisclosure agreements with the U.S. government that would require any pre-publication review of this book," the company's Executive Vice President and General Counsel Carol F. Ross wrote Monday.

The controversial book is set to hit store shelves later this month.

The book, titled "A Warning," comes roughly a year after the senior official laid out his scathing attack. According to the publisher, the book will be released on Nov. 19 and pick up where the controversial op-ed left off.

"This explosive book offers a shocking, first-hand account of President Trump and his record," the publisher said last month.

Javelin's Matt Latimer and Keith Urbahn, both of whom represented former FBI Director James Comey on his book, are working with the author, whose identity is still unknown to the public.

Titled "I Am Part of the Resistance Inside the Trump Administration," the Times op-ed -- which was published Sept. 5, 2018 -- revealed that the author and others in the administration wanted to undermine Trump's agenda. While the author distances themselves from the popular "resistance" movement, they also asserted that thwarting Trump was vital to the health of the nation.

"We believe our first duty is to this country, and the president continues to act in a manner that is detrimental to the health of our republic," the official said in the op-ed.

The op-ed took particular aim at the president's behavior, claiming he was "erratic" and had a fundamental "amorality" that plagued his administration.

"Anyone who works with him knows he is not moored to any discernible first principles that guide his decision making," it read.

Then-White House Press Secretary Sarah Sanders responded by blasting the author's cowardice and calling on them to resign. It's unclear whether the official is still in the administration.