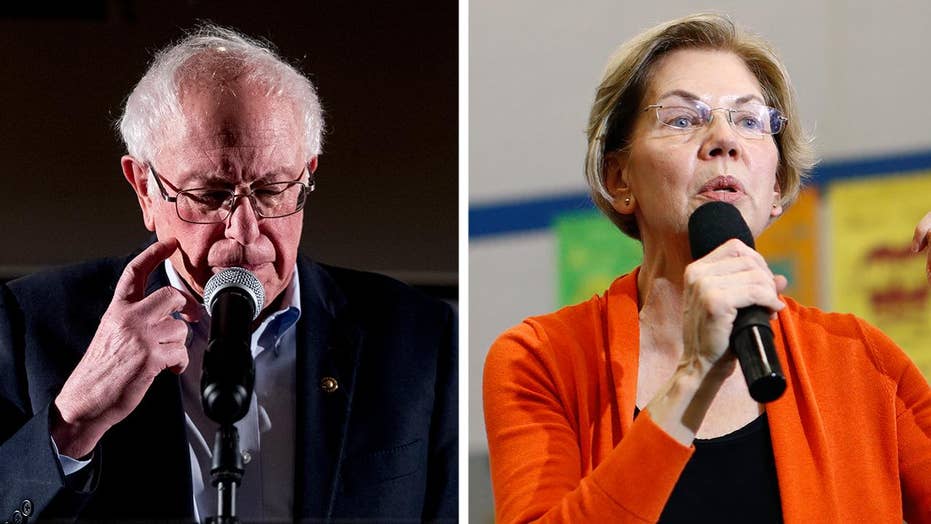 "[The media wants] to anoint the person who's going to win and that's what they do," Gutfeld said on "The Five." "They don't think Sanders is going to win. That's why they bumped him out for Hillary [in 2016]. The media chooses the Democratic candidate. They can't control Bernie's people."

Earlier Monday, Sanders denied a CNN report that claims he once told Warren a woman could not win the 2020 presidential race. The report cited four accounts of a December 2018 meeting between Warren and Sanders, with three sources saying Warren responded to Sanders' comments by saying she disagreed.

"Trump makes all these candidates look like... runner-ups at 'The Bachelor,' right? They seem so much smaller," Gutfeld said. "You know, you can hate Trump all you want, but you can't replace America's bad boy," "

"The Greg Gutfeld Show" host said Warren and Sanders are trying to mimic Trump by commanding the media's attention.

"These candidates are suffering from Trump oxygen depletion effect, which happened in 2016, Trump walks into the room, sucks out all the oxygen, but he's getting an assist from the media," Gutfeld said. "So what happens is you end up having ... Liz and Bernie mimic him in these attacks because that's the only way they're going to get any oxygen for themselves.

Co-host Juan Williams warned that things could change for Trump once the nominee is declared.

"Democrats, as much as they've been trailing in terms of fundraising to President Trump's campaign," Williams said. "You know, the overall fundraising for the Democrats is about on par. And it looks to me like Democrats are fired up to take out Trump."