Glenn Beck remembers Rush Limbaugh: 'He was a great teacher'

"I don’t know any man, any one person -- not a movement, not a collection of people -- any one person that changed the culture as much as Rush Limbaugh did that added to the culture," Beck told host Tucker Carlson. "Maybe Johnny Carson."

Beck remembered Limbaugh as a very "private" and "humble" man, recalling a personal story from the first time he tried out for a talk show at Premier Networks

"He allowed me to use his studio with his golden microphone, which was terrifying to me. Then when Premier was going to syndicate me, he listened to my show for a week, before they even told me they would make me an offer. When it came down to it, the president of Premier met with Rush. He actually thought they were going to say, ‘Hey, we are moving on. Things are not so great.’ He did not have the ego he had on the air ... He knew most people didn’t last 30 years in broadcasting, but I don’t know if he knew he wasn’t most people." 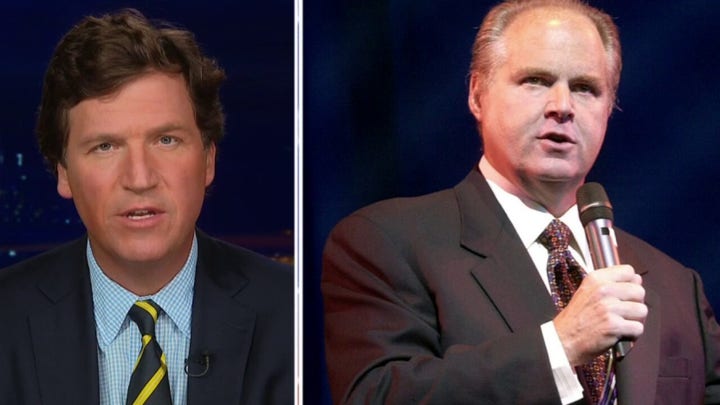 "How do you last 30 years in a business like this, with the daily intensity, with the relentless attacks not just on your business, but on you, your character and your family?" Carlson asked. "How do you not become warped and bitter and lose your creative power?"

"The way the left slits throats and lets you bleed in the street, and the dirty things they do is different than it was 25 years ago," Beck responded. "He had to know what he believes. Nobody can do three hours live, unscripted every day and be faultless, and nobody can fake it that long. He had to believe it. He knew who he was.

Beck concluded by reiterating that Limbaugh should be remembered as "the Johnny Carson of radio" and for saving the AM format.

"That medium was over. He completely reinvented it," he recalled. "He was the first voice since Kennedy was in office that didn’t have to answer and have a liberal on the other side. He could actually speak in a way people understood. He was a great teacher."