President Trump’s words and actions Monday – railing against “weak” governors and mayors, then holding a Bible outside a historic church near the White House – may have marked “the beginning of the end” of American democracy, a retired four-star Marine Corps general writes in an op-ed article.

“The slide of the United States into illiberalism may well have begun on June 1, 2020,” John Allen, who served as a special envoy for the global alliance against ISIS under former President Barack Obama and now heads the Brookings Institution think tank, writes in Foreign Policy magazine. “Remember the date. It may well signal the beginning of the end of the American experiment.”

TRUMP FIRES BACK AFTER MATTIS CONDEMNS HIS 'MOCKERY' OF THE CONSTITUTION: 'GLAD HE IS GONE!'

Earlier Wednesday, Esper told reporters at a morning news briefing that he opposed invoking the Insurrection Act in order to deploy U.S. military personnel to quell violent protests that have erupted across the U.S. in reaction to the May 25 death of George Floyd in police custody in Minneapolis.

Then later, Mattis – in an interview published by The Atlantic magazine – tore into Trump, accusing the president of deliberately trying to divide the nation.

Esper was said to be “on thin ice” following his public split from the president, Politico reported, citing unnamed Trump administration officials. But at a White House news briefing, press secretary Kayleigh McEnany declined to discuss Esper’s standing with the president. 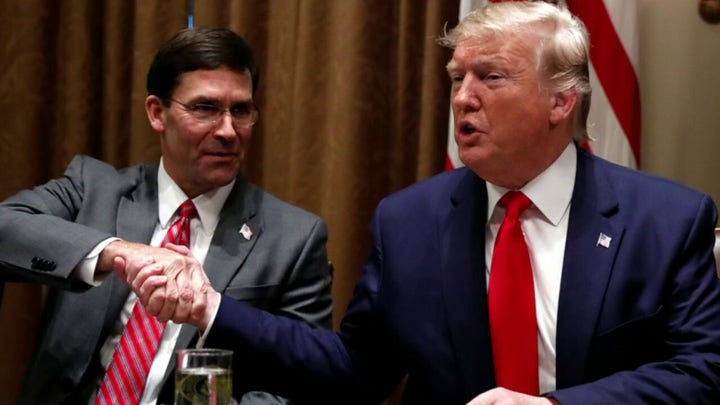 As for Mattis, his remarks drew a set of Twitter messages directly from the president.

"Probably the only thing Barack Obama and I have in common is that we both had the honor of firing Jim Mattis, the world’s most overrated General," Trump wrote. "I asked for his letter of resignation, & felt great about it. His nickname was 'Chaos', which I didn’t like, & changed it to 'Mad Dog.'

"His primary strength was not military, but rather personal public relations. I gave him a new life, things to do, and battles to win, but he seldom 'brought home the bacon'. I didn’t like his 'leadership' style or much else about him, and many others agree. Glad he is gone!"

In his article, Allen cites three reasons why Trump’s words and actions on Monday were “notable.”

First, Allen writes, “Donald Trump expressed only the barest of condolences at the murder of George Floyd, but he also said nothing about the fundamental and underlying reasons for the unrest: systemic racism and inequality, a historic absence of respect, and a denial of justice.”

He accuses Trump of seeing the Floyd crisis only “as a black problem” – despite broader related societal issues -- and “an opportunity to use force to portray himself as a ‘law and order’ president.”

Second, Allen accuses Trump of viewing all of those engaged in unrest as “an enemy” even though the perpetrators of violence, destruction and looting are “minuscule in numbers.”

“The vast majority of the people protesting in the streets are justifiably furious at the murder of George Floyd,” Allen writes, “but they’re even angrier over pervasive injustice, mass incarceration, frequent false arrests, and an institutionalized devaluation of black lives and property.”

Third, Allen asserts, Trump claimed to be an “ally of peaceful protesters,” but sent riot police and troops to violently remove peaceful demonstrators from Lafayette Park near the White House so that Trump and other members of his administration could safely walk to St. John’s Episcopal Church to “pose there for a photo-op.”

In a national moment of crisis, Allen adds, Trump “failed to show sympathy, empathy, compassion, or understanding – some of the traits the nation now needs from its highest office.”

In sum, Allen writes, “Monday was awful for the United States and its democracy.”

As of early Thursday, the president hadn’t commented on Allen’s article.

But during a Wednesday evening interview with Sean Spicer on Newsmax, the president appeared to scale back his earlier tone about sending the military into U.S. cities.

“I don’t think we’ll have to,” Trump said, though noting he retained “very strong powers to do it” if necessary.

Fox News' Gregg Re contributed to this story.