Parents and education activists expressed skepticism about the Biden administration's new parents council, arguing its makeup suggests it will simply be a rubber stamp for the White House's ideological agenda.

The National Parents and Families Engagement Council, introduced last Tuesday, is intended to find "constructive ways to help families engage at the local level," according to the Department of Education. The council will conduct "listening sessions" to explore what schools can do to help students recover from the pandemic.

FAIRFAX PARENTS REACT AS BOARD VOTES ON PUNISHMENTS FOR STUDENT ‘MISGENDERING’: ‘COMPELLING THEM TO SPEECH’

Some parents are sharing concerns about the chosen groups, arguing they have ideological agendas. LULAC, for instance, sent a letter strongly opposing the nomination of Supreme Court Justice Brett Kavanaugh and have openly endorsed Cardona.

Additionally, the National Parents Union publicly defended the infamous National School Board Association (NSBA) letter to the DOJ requesting that parents' actions at school board meetings should be examined under the Patriot Act as "domestic terrorists."

"If you threaten to kill school board members, you SHOULD hear from the Justice [Department]," National Parents Union President Keri Rodrigues wrote on Twitter during a back and forth with a parent. "Some of these anti-mask/CRT knuckleheads tried this with us a couple weeks ago."

Elizabeth McCauley of the Virginia Mavens told Fox News Digital that the creation of the council is an indication that the Biden administration knows they have been "put on notice by parents across the political spectrum who truly want students educated versus indoctrinated and do not want to have any sexualization of young children and students by radical out of touch school boards."

But she was less than impressed with the makeup of the committee.

"By and large my main frustration with the committee is its (sic) lack of representation of the very groups of parents who have felt so disenfranchised by school boards across the country - Asian American parents who have advocated to preserve merit based admittance to governor schools - in Fairfax County that would be the Thomas Jefferson School, parents like myself who are highly concerned about pornographic novels with pedophilia in the schools, and parents who are working to stop medical discrimination in our schools, so students are not forced to comply with vaccine mandates of inoculations still under emergency use authorization," McCauley said.

U.S. President Joe Biden and U.S. Education Secretary Miguel Cardona deliver remarks during an event for the 2022 National and State Teachers of the Year in the East Room of the White House on April 27, 2022, in Washington, D.C.  (Anna Moneymaker/Getty Images)

Elicia Brand, co-founder of Army of Parents, said her group would "welcome" the opportunity to work with the White House and the other council organizations to work toward the betterment of students and communities. But, she told Fox News Digital, "We do not believe that Army of Parents or organizations like ours are on Cardona's invite list. Parents advocating for their children will not be fooled. The gap will continue to widen."

"Biden's education council is made up of people and organizations that are in lock step with the administration's socialist ideology and agenda for our children," Brand said. "Without the involvement of organizations that have alternative view points, the Council is simply performative, a media opportunity, designed only to increase approval ratings and to advance an agenda that does not include Parental Rights, core academic excellence or safety in schools."

MISSOURI TEACHERS CAN HIDE PRIVATE CONVERSATIONS WITH STUDENTS FROM PARENTS, SAYS POLICY IN DOZENS OF SCHOOLS

"The Parents Council is a consortium of left-wing special interest groups," Fox News contributor Karol Markowicz agreed. "These astroturfed groups are the exact opposite of parents who got up at school board meetings to fight for their kids' educations. These groups are the same people standing in the way of parents. Sec. Cardona and the rest of the Biden administration think parents will be tricked by this group. They won't."

Florida mom and Moms for America senior director Quisha King offered the administration a new name: The "No Place for Parents Council."

"Parents have spent years battling the government to take their hands off our children," King told Fox News Digital. "Their response, after accusing us of terrorism is to create a council to formally come between parents and children? That's how I see it. I do not trust that Secretary Cardona has suddenly had a change of heart. Parents don’t need the federal government (sic) or local government showing us how to engage on behalf of our children. If anything, the federal government should be instructing school boards and departments of education to honor the oath they took to listen to their constituents." 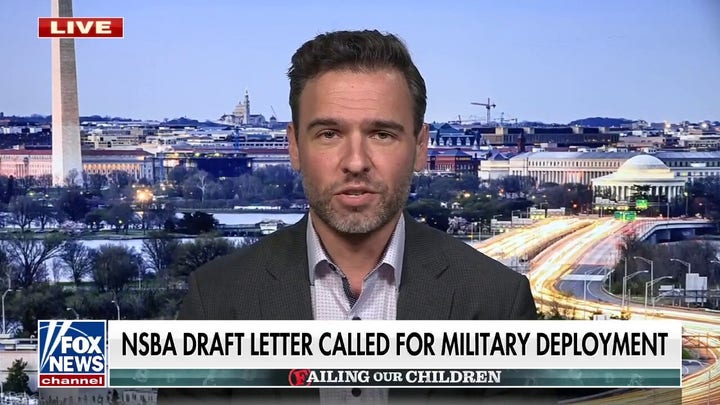 Parents Defending Education President and Founder Nicole Neily, similarly concerned by the members of the administration's new committee, said the effort is also "too little too late."

"This is too little too late from this Administration, which has made abundantly clear through its actions that it views actual parental input as an inconvenience; let’s remember, this is the same set of bureaucrats that coordinated for weeks with the National School Board Association on its since-retracted letter which cited the Patriot Act," Neily said in a statement. "The organizations hand-picked to participate do not speak for the views of most American parents; if they did, we would not have seen such a groundswell of activism over the past few years. Families came to the sobering realization that groups like the National PTA were as ideologically compromised as the elected officials that abandoned our children. I would have hoped the Biden Administration would realize the importance of bringing many perspectives to the table - but I am not surprised that other voices are not welcome."

The Department of Education did not immediately respond to a request for comment.

Some parents protesting policy changes that would increase punishments for students for "misgendering" ahead of a Fairfax County school board meeting last Thursday said they do not trust the administration to lead on the issue of education. Parents have shown up at similar meetings across the country to speak out against strict COVID-19 measures, progressive agendas, and race-based classroom lessons the past two years.

"If it's a Biden administration action, I don't trust it at all," Steve Robinson, a parent from Fairfax, told Fox News Digital of the new parents council.

The media's coverage of the administration's new effort has seemed to suggest that it was formed with politics in mind.

"The Biden administration has been seeking to elevate the role parents play in education after inroads Republicans made on an issue long considered a Democratic stronghold," the U.S. News & World Report wrote of the committee.