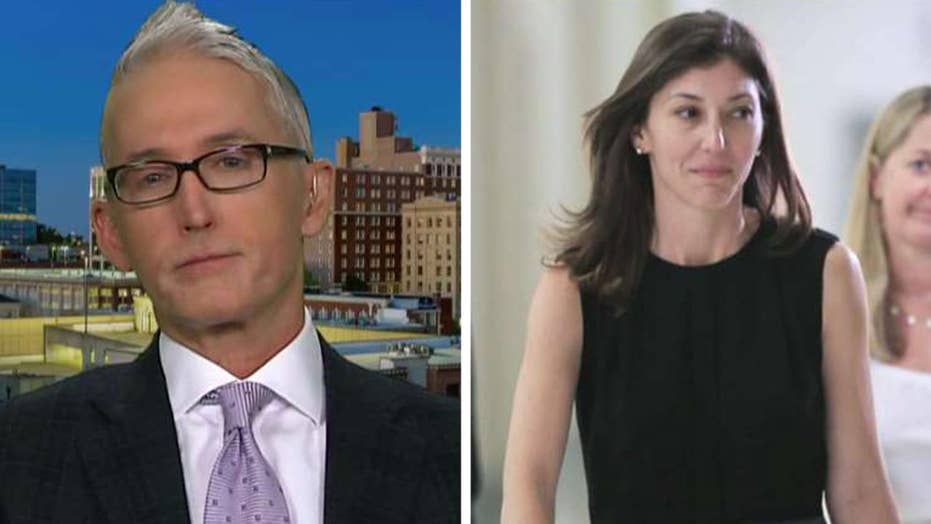 Gowdy: No amount of context will change content of Strzok-Page texts

MSNBC announced on Friday that it has hired former FBI lawyer Lisa Page as an NBC News and MSNBC national security and legal analyst.

"You must be kidding??? This is a total disgrace!" Trump tweeted.

Page made her debut as an MSNBC analyst during "Deadline: White House" alongside former Mueller probe prosecutor Andrew Weissmann, who appears to have been rehired by the network after they severed ties after it was announced he was hosting a Biden fundraiser, which was ultimately canceled.

Both Page and Weissmann offered legal analysis on the ongoing feud between President Trump and Washington, D.C., Mayor Muriel Bowser over the presence of outside troops.

Page is best known for her publicized text exchanges with her lover, ex-FBI agent Peter Strzok, which revealed extreme animosity towards Trump during the 2016 election and created the perception that their political views fueled the Russia investigation.

The texts that sounded the alarm for GOP lawmakers was Strzok's reference to an "insurance policy" that was discussed at Deputy FBI Director Andrew McCabe's office. Page denied that meant the FBI had plotted to remove Trump if he won the election.

Last December, Page broke her silence and made her television debut on MSNBC's "The Rachel Maddow Show," where she was asked about the "insurance policy" text.

"It's an analogy," Page explained. "First of all, it's not my text, so I'm sort of interpreting what I believed he meant back three years ago, but we're using an analogy. We're talking about whether or not we should take certain investigative steps or not based on the likelihood that he's going to be president or not."

She continued, "You have to keep in mind ... if President Trump doesn't become president, the national-security risk, if there is somebody in his campaign associated with Russia, plummets. You're not so worried about what Russia's doing vis-à-vis a member of his campaign if he's not president because you're not going to have access to classified information, you're not going to have access to sources and methods in our national-security apparatus. So, the 'insurance policy' was an anology. It's like an insurance policy when you're 40. You don't expect to die when you're 40, yet you still have an insurance policy."

The love affair between Page and Strzok was previously mocked by President Trump at several of his campaign rallies.

MSNBC had seen a surge in viewership during the Russia investigation, but ever since Special Counsel Robert Mueller released his findings, the network has taken quite the tumble. Its most popular program, “The Rachel Maddow Show,” continued in May its extended nosedive in the cable news ratings. Maddow finished the month of May behind five different Fox News programs in total viewership, including non-primetime shows “The Five” and “Special Report with Bret Baier.”