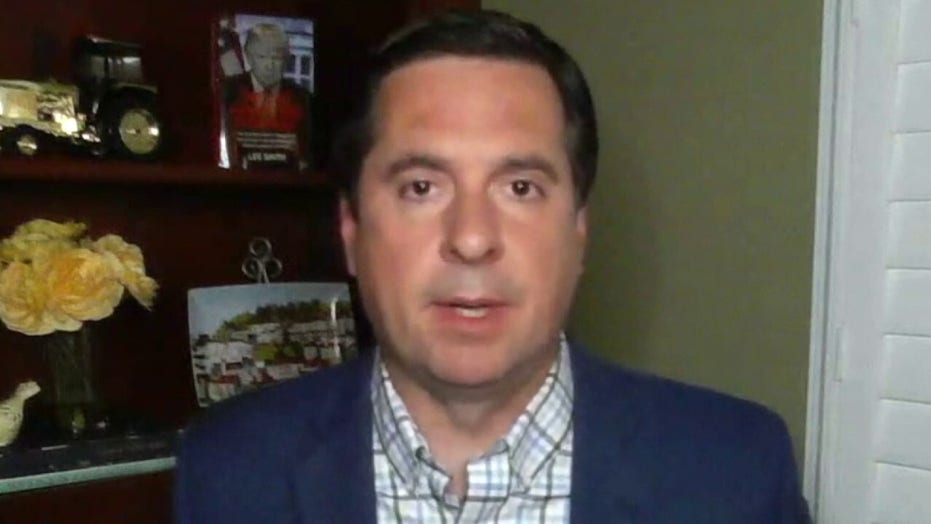 "If any Republican leader, if [Senate Majority Leader] Mitch McConnell or [House Minority Leader] Kevin McCarthy or any of our speakers in the past would have done something like Pelosi did, where she's sitting at home in front of her refrigerator with a $24,000 freezer that I don't think too many of us have... it would be a fatal flaw," Nunez told "Fox & Friends Weekend."

"We would boot McConnell or McCarthy out of leadership just like that," he added. "They would have been out four days ago, the minute that popped up."

He also said the media gave Pelosi a free pass.

"If you have Mitch McConnell with a bunch of gourmet ice cream, he'd be thrown out of leadership immediately."

Nunes was referencing Pelosi's appearance via livestream on CBS' "Late Late Show" last Monday, during which she showed host James Corden her elaborate ice-cream collection while standing in front of a high-end, pricey refrigerator. Pelosi later posted the controversial clip on Twitter, with the caption: "We all have found our ways to keep our spirits up during these trying times. Mine just happens to fill up my freezer."

"What the hell is going on?" Nunes shot back.

Nunes was the latest Republican lawmaker to criticize the leader for showing off her wares amid nationwide layoffs and furloughs. Meanwhile, Senate Democrats earlier this month rejected a request by McConnell, R-Ky., to provide unanimous consent to legislation that would have added $250 billion to the SBA's Paycheck Protection Program (PPP).

"When you have... 20 million people unemployed and you have people that can't get paychecks... she's sitting in San Francisco eating gourmet ice cream? It doesn't fly, out in the real world," Nunes said.

Democrats said any legislation to fund the small business program also needed to provide aid to hospitals, Nunes explained, adding that lawmakers have been in contact and have proposed a "logical plan" that would gain bipartisan support.

"We had a conference call yesterday. We have another one scheduled for tonight. The idea is she [Pelosi] would 'plus up' the money for the paycheck protection so that we can keep people employed and also give money for hospitals. That seems like a logical great plan, has huge bipartisan support. I think it's one the American people would understand," he said.

Nunes also said the mainstream media were "covering up" Pelosi's tone-deaf late-night appearance, accusing Democrats of a double standard in their coverage of the party leader.

"Like I said at the beginning, when you have a leader that makes such a fatal flaw, what would be a fatal flaw for a Republican, for a Democrat the media is covering up... if you have Mitch McConnell with a bunch of gourmet ice cream, he'd be thrown out of leadership immediately."