The left can’t seem to come together when it comes to the polarizing "defund the police" slogan, creating infighting between Democratic politicians, activists and members of the mainstream media.

“The left haven’t seemed to have been able to get on the same page with the messaging of ‘defund the police’ for a while now. They know it polls extremely badly, especially in urban areas where the police are actually appreciated and needed,” political satirist and pundit Tim Young told Fox News.

“So the smarter leftists shift the terminology to make it seem as if it's anything other than taking money away from the police,” Young added. “The not-as-smart extremists will just roll the dice with everything and anything and ignore that their ideals were firmly rejected in the 2020 election.”

Former President Barack Obama argued this week that political candidates alienate voters when they use "snappy" slogans such as "defund the police." He made the comments during an interview with Peter Hamby on the Snapchat original political show "Good Luck America" that aired Wednesday morning. 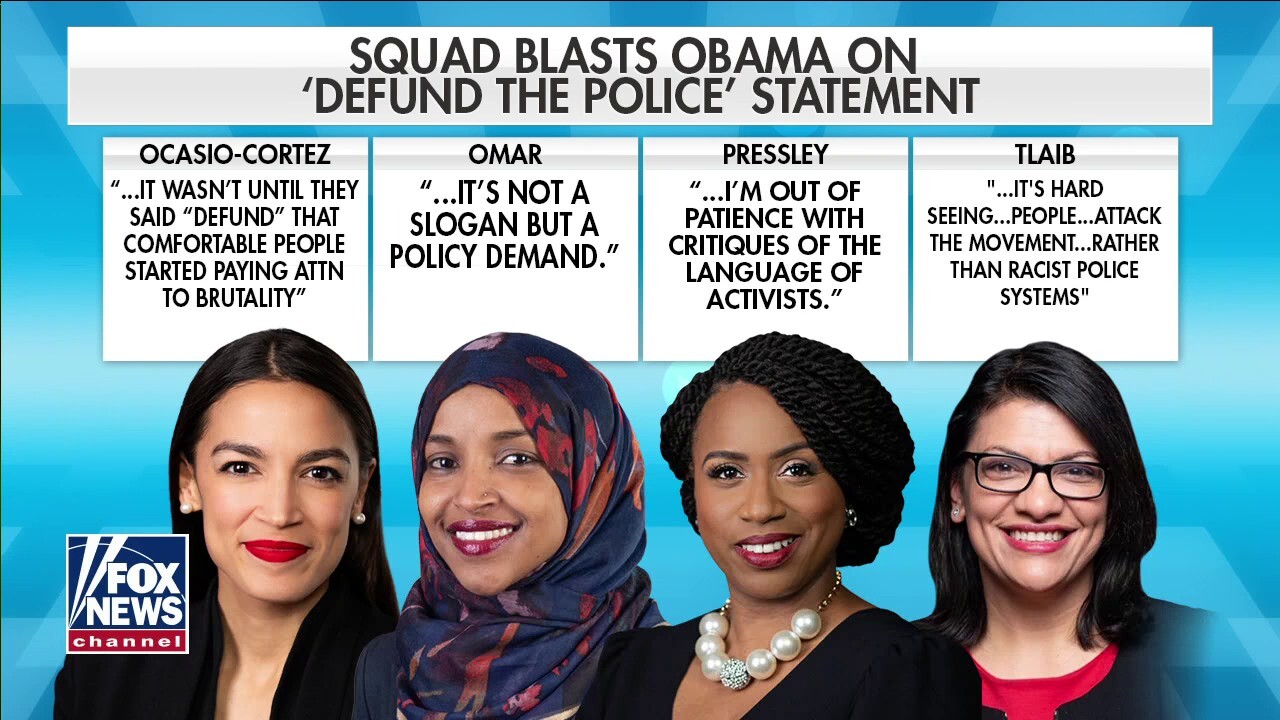 "You lost a big audience the minute you say it, which makes it a lot less likely that you're actually going to get the changes you want done," Obama said. "The key is deciding, do you want to actually get something done, or do you want to feel good among the people you already agree with?"

Obama, typically a media darling who is rarely scrutinized by liberals, managed to irk some pundits with his comments.

MSNBC’s far-left anchor Joy Reid disagreed with Obama’s criticism of the “defund the police” slogan Wednesday on her show.

“I gently disagree with President Obama. I don’t think anybody who disagrees with defund the police was ever going to vote for any Democrat anyway, so I think it energized a lot of young voters,” Reid said.

“I think it’s a conversation that needs to be had,” Rye said. “I think the moment that we begin to ask politicians to account for and to opine on rhetoric of the activists’ community is the moment that we walk into real trouble.”

Lemon, the hyperpartisan CNN host, sided with Obama and told Rye the slogan “is not a winning strategy.”

“I know you said you don’t care, but as an activist shouldn’t you care? Because that slogan lost seats,” Lemon said.

Rye shot back, “It actually didn’t.”

Lemon and Rye bickered about whether or not the “defund the police” slogan actually hurt Democrats, who held a 35-seat advantage in the House before the election. The party will see its majority shrink by at least nine seats, making it one of the thinnest margins in decades, following a better-than-expected performance by down-ballot Republicans.

“Democrats lost across the board. The only Democrat that won was Biden,” Lemon said as Rye continued to disagree.

“The problem here is that the left came up with what they thought was just a good marketing expression and far-left whackos took it seriously. And their allies in the press promoted it like it was a legitimate policy idea. But, instead of serving as a rallying cry against police, it became a rallying cry for them,” Media Research Center vice president Dan Gainor told Fox News.

“Ordinary Americans of all walks of life and all races don’t want to defund police. We want police abuses eliminated but we want to be safe in our homes and not have roaming bands of violent psychos take over our cities,” Gainor said. “Even Obama understands that. It’s a horrible, far-left, insane message to send. And House Democrats suffered at the polls because even the press couldn’t hide how many on the left really want to shut down police and turn America over to the mob.”

"The View" co-host Sunny Hostin also ripped Obama on Wednesday for his critical words about the "defund the police" movement, saying the former community organizer should know better.

"You know, I’m always loathe to criticize President Obama because I’m such a fan, but I do think he’s wrong here," Hostin said.

Reid, Rye and Hostin aren’t the only liberals to disagree with Obama, as several progressive Democrats have also chimed in since Obama’s comments. 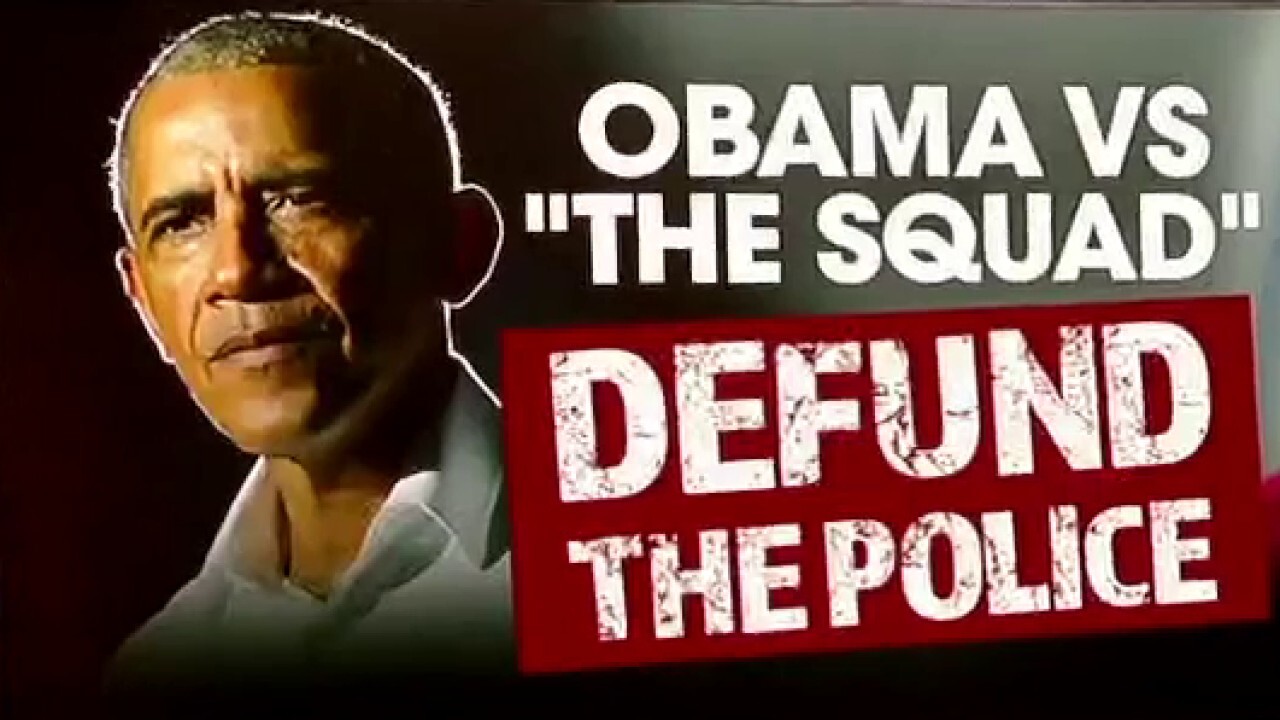 "We lose people in the hands of police," Rep. Ilhan Omar, D-Minn., shot back. "It’s not a slogan but a policy demand. And centering the demand for equitable investments and budgets for communities across the country gets us progress and safety."

Other members of the so-called "Squad" joined Omar in pushing back against Obama's comments.

"Rosa Parks was vilified & attacked for her civil disobedience. She was targeted. It's hard seeing the same people who uplift her courage, attack the movement for Black lives that want us to prioritize health, funding of schools & ending poverty, rather than racist police systems," Rep. Rashida Tlaib, D-Mich., tweeted.

Rep. Ayanna Pressley, D-Mass., said she's "out of patience" with criticism of the language that activists used.

"The murders of generations of unarmed Black folks by police have been horrific," she tweeted. "Lives are at stake daily so I’m out of patience with critiques of the language of activists. Whatever a grieving family says is their truth. And I’ll never stop fighting for their justice & healing."

OBAMA SLAMS ‘DEFUND THE POLICE’ IN ONLINE INTERVIEW: ‘YOU LOST A BIG AUDIENCE THE MINUTE YOU SAY IT’

The movement to "defund the police" – redirecting funds away from police departments toward other government agencies – gained traction among activists after the death of George Floyd in May. Cities around the country, including New York City, Los Angeles and Portland, have already reallocated funding from their police department budgets.

Conservative strategist Chris Barron thinks Obama and his critics essentially want the same thing but have different methods when it comes to delivering the message.

“Let’s be clear, there isn’t an ounce of difference substantively between what Obama wants and what the Squad wants. Obama is just smart enough to know he has to lie to the American people about it. This is all about PR. The Democratic Party is split between those who want to defund the police and those who want to defund the police but call it something else,” Barron told Fox News.

Meanwhile, Young pointed out that the people openly in favor of the slogan are largely wealthy media members and government officials.

Cities that sliced municipal police funding this year, such as New York and Minneapolis, have seen significant spikes in crime.