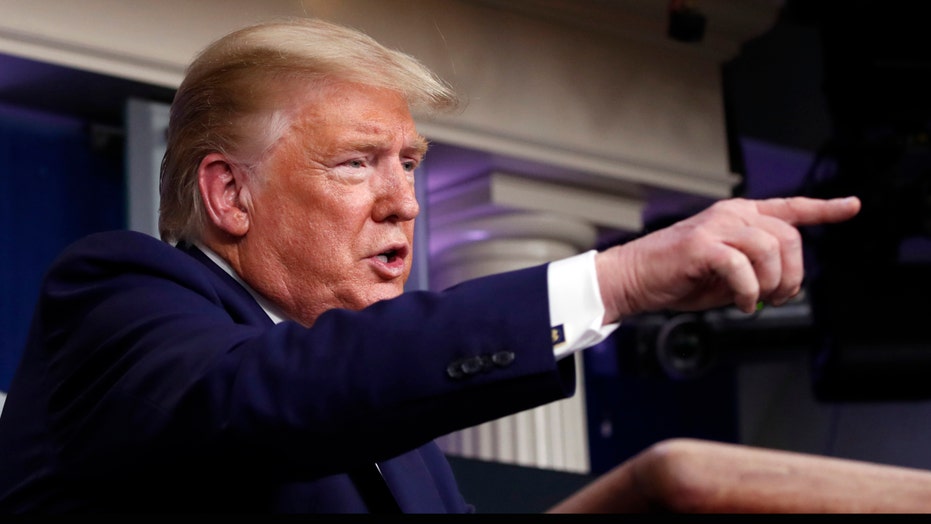 Trump warns Americans to prepare for hard days ahead: We're going to go through a very tough two weeks

The network, at first, continued with its scheduled programming and started airing the briefing only when the president was wrapping up his comments and handed the podium to coronavirus task force member Dr. Deborah Birx. The network carried most of the rest of the briefing, including Trump taking questions later.

MSNBC carried the briefing from the start until shortly before it ended; the briefing lasted over two hours in all.

It came just one day after primetime anchor Don Lemon called for his network not to air the briefings live. However, CNN did not immediately respond to Fox News' request for comment over its decision.

It was a sobering briefing as Trump and task force officials revealed projections that 100,000 to 240,000 people could die from the virus in the U.S., even if current prevention measures remained in effect.

"I never want to hear @CNN-ers  --- everyone from Tapper to Stelter to Lemon --- complain about there not being briefings again. They've spent over a year pre-pandemic complaining about no daily briefings with a press secretary. And now they're ORANGE MAN BAD WE CAN'T," NewsBusters managing editor Curtis Houck exclaimed.

"This is one of the newsier and substantive briefings to date," National Journal politics editor Josh Kraushaar reacted.

"I remember CNN cutting away from other candidate's speeches in 2016 to cover an empty airfield waiting for Trump to land for a rally. Today they don't cover Trump on a day he promised to give a presentation to show why he extended the coronavirus guidelines. Not a great look," writer Josh Jordan scolded the network.

TRUMP SPARS WITH JIM ACOSTA AT CORONAVIRUS BRIEFING: 'THIS IS WHY PEOPLE DON'T WANT TO LISTEN TO CNN ANYMORE'

"CNN isn’t broadcasting the President of the United States giving an update on a pandemic and is instead tweeting about a former president complaining about fuel standards regulation, in case you were wondering about their priorities," political strategist Drew Holden reacted to a CNN story about former President Obama's new complaint about the Trump administration rolling back climate-change initiatives.

One of the anti-Trump network's primetime anchors made passionate remarks Monday night saying the network should not air such briefings live.

"I have said I don't think that you should really listen to what he says, you should listen to what the experts say," Lemon told his colleague Chris Cuomo during their nightly handoff. "I'm not actually sure, if you want to be honest, that we should carry that live. I think we should run snippets. I think we should do it afterwards and get the pertinent points to the American people because he's never, ever going to tell you the truth."

That apparently was enough to influence his boss, CNN President Jeff Zucker, who defended the network's decision to air Trump’s coronavirus task force briefings live, despite employees complaining about them.

Citing “multiple sources,” The Daily Beast reported Zucker told staffers that CNN viewers should hear from coronavirus experts including Birx and Dr. Anthony Fauci, who regularly have appeared alongside Trump at the briefings.

“It’s a very difficult decision... as of now, we are going to continue to carry those briefings,” Zucker reportedly told his staff.

Zucker's defense of airing the briefings came just hours before Lemon's opposing plea to the network.