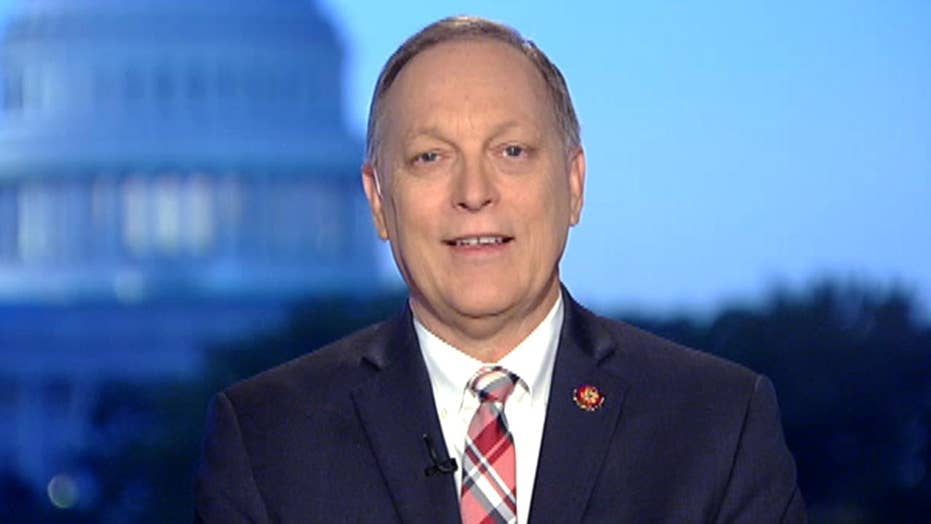 Republican Rep. Andy Biggs speaks out on the party's demand for transparency in Democrats' impeachment inquiry.

Members of the media widely panned GOP lawmakers for storming a closed-door impeachment hearing Wednesday, but offered a vastly different response when Democrats organized a pro-gun-control "sit-in" a few years ago.

Dozens of Republicans brought proceedings to a screeching halt Wednesday by storming into a closed-door deposition with a senior Defense Department official, prompting House Intelligence Committee Chairman Adam Schiff, D-Calif., to suspend the proceedings for hours in a remarkable scene.

Some commentators injected race into the news story. MSNBC's Donny Deutsch mocked "those white guys, those middle-aged, boring, nerdy-looking white guys." CNN analyst Bianna Golodryga had a similar sentiment, saying she saw "a bunch of white men and I just thought to myself, 'This is not what America looks like right now.'"

"This was a disgraceful stunt," Boykin reacted on a CNN panel. "This looked like a Klan group that is assembled outside of a jail trying to get the sheriff to let them in so they could deliver their own justice against somebody who's inside. It's not a good look for our democracy, it's not a good look for the Republican Party."

However, the same networks expressed high praise for Democrats when they staged a sit-in on Capitol Hill to force a gun vote following the 2016 Orlando massacre that left 49 dead.

NBC anchor Savannah Guthrie referred to the sit-in as "extraordinary." Her colleague, NBC News White House correspondent Peter Alexander, hyped the protest, saying, "Make no mistake, this was dramatic, like nothing we have ever seen before, truly one of the most dramatic demonstrations on the House floor in modern American history."

CNN anchor Brooke Baldwin showered Rep. John Lewis, D-Ga., with praise, linking his efforts in the civil rights movement to his participation in the sit-in during an interview with a congressman.

She told one lawmaker, "Watching John Lewis, a man who marched with Dr. King, played an integral role in race equality. And now, you see him literally sitting with your colleagues on the floor!"