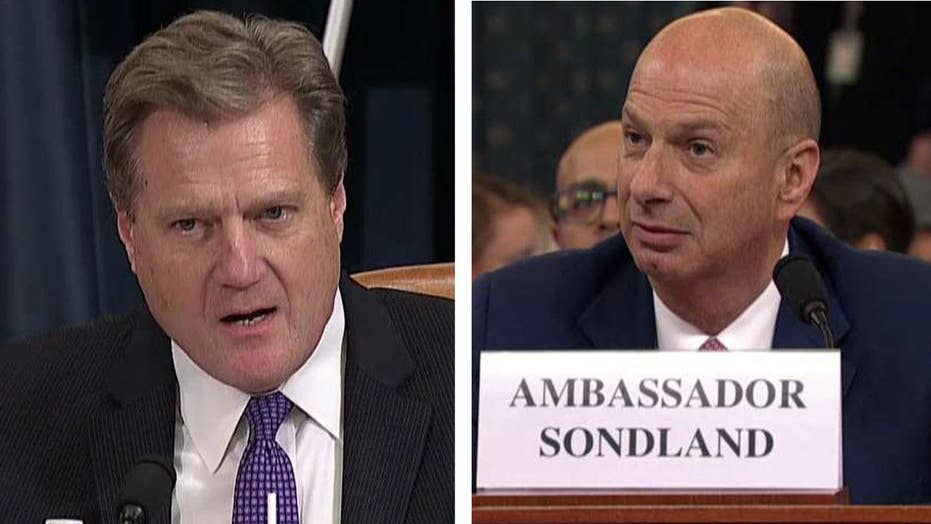 Amb. Gordon Sondland acknowledges that no one told him Trump was tying aid to Ukraine investigations

The Associated Press was forced to take down a tweet that inaccurately claimed President Trump had contradicted the testimony of U.S. Ambassador to the European Union Gordon Sondland, despite Trump and Sondland using the same words.

Speaking to reporters before departing on a scheduled trip to Texas, Trump claimed Sondland's testimony meant "it's all over" for the proceedings and that the House inquiry into Trump needed to come to a halt.

The Associated Press was forced to take down a tweet about President Trump and U.S. Ambassador to the European Union Gordon Sondland, who testified before House lawmakers Wednesday. (AP Photo/Andrew Harnik, Montage)

However, The Associated Press tweeted that Trump's remarks were "contradicting" Sondland's.

"Contradicting the testimony of his own ambassador, President Trump says he wanted "nothing" from [Ukraine] and says the #ImpeachmentHearings should be brought to an end," the now-deleted tweet read.

Critics slammed the news outlet for the inaccurate tweet.

"This is not a contradiction. It is a direct quote from Amb. Sondland's testimony," Rep. Mark Meadows, R-N.C., reacted.

"It’s a direct quote from Sondland’s testimony about his conversations with Trump, you incompetent liars," The Federalist co-founder Sean Davis wrote.

After deleting the tweet, The Associated Press then wrote how Trump was "highlighting" Sondland's testimony, but adding that Sondland "said at other points that there was a quid pro quo involving" the Ukrainian government.

The AP also said, "An earlier tweet that didn’t make clear that President Trump was quoting from Gordon Sondland’s testimony in which he was quoting Trump has been deleted."