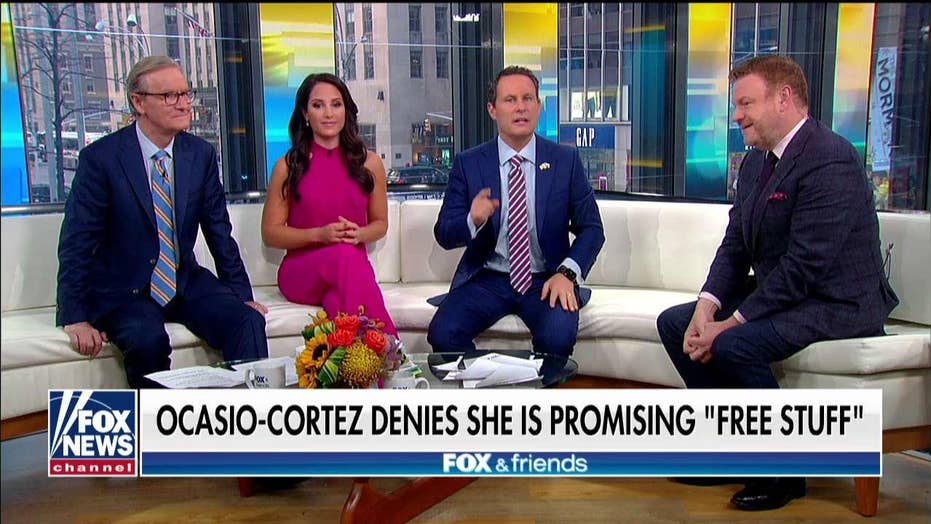 Rep. Alexandria Ocasio-Cortez, D-N.Y., was slammed on Friday night over what critics say is a "misleading" tweet touting a new report about Amazon bringing jobs to New York City.

Last summer, Ocasio-Cortez waged war against Amazon after the retail giant struck a deal with the state of New York to open a second headquarters in New York City, which would have brought 25,000 jobs to the city, in exchange for $3 billion in state and local subsidies. Ultimately, Amazon backed out of the deal.

However, it was reported Friday that Amazon was leasing a 335,000-square-foot office space in Manhattan that is set to bring more than 1,500 jobs into the city.

"Won’t you look at that: Amazon is coming to NYC anyway - *without* requiring the public to finance shady deals, helipad handouts for Jeff Bezos, & corporate giveaways," Ocasio-Cortez said. "Maybe the Trump admin should focus more on cutting public assistance to billionaires instead of poor families."

She also posted a picture of herself sitting on the couch with the caption: "Me waiting on the haters to apologize after we were proven right on Amazon and saved the public billions."

Many took exception to the "victory lap" the freshman congresswoman made and pointed to the math of the jobs that were still lost from her battle with Amazon.

"Another day, another viral misleading tweet from AOC. Amazon is leasing office space in Manhattan for 1,500 employees, which is 6% of the 25,000 jobs its HQ2 in Queens (her district) was supposed to add," The Daily Caller's Peter Hasson said.

This isn't the first controversy Ocasio-Cortez stirred up on Twitter this week.

The Democratic "Squad" member received pushback Thursday after claiming her family "might've just starved" had the Trump administration's tightened requirements for food stamp recipients been in place when her father died in 2008.

Critics claimed the freshman congresswoman misrepresented the new rule, pointing out that it applies only to childless, able-bodied adults under 50.

The U.S. Agriculture Department (USDA) finalized the first of three proposed rules targeting the Supplemental Nutrition Program, known as SNAP. The plan announced Wednesday will limit states from exempting work-eligible adults from having to maintain steady employment in order to receive benefits.

Ocasio-Cortez, 30, responded to the announcement on Twitter on Thursday.

“My family relied on food stamps (EBT) when my dad died at 48. I was a student. If this happened then, we might’ve just starved. Now, many people will,” Ocasio-Cortez said. “It’s shameful how the GOP works overtime to create freebies for the rich while dissolving lifelines of those who need it most.”

The New York Democrat was 19 and about to begin her sophomore year at Boston University when her father, Sergio Ocasio, died of lung cancer. It is likely her mother still would have claimed her as a dependent at that time.

Several critics challenged the congresswoman, including The Heritage Foundation, a conservative Washington-based think tank, writing: “The rule applies to able-bodied adults between the ages of 18 and 49 who do not have dependents. The rule wouldn’t apply to parents with minor children, the elderly, or disabled people.”