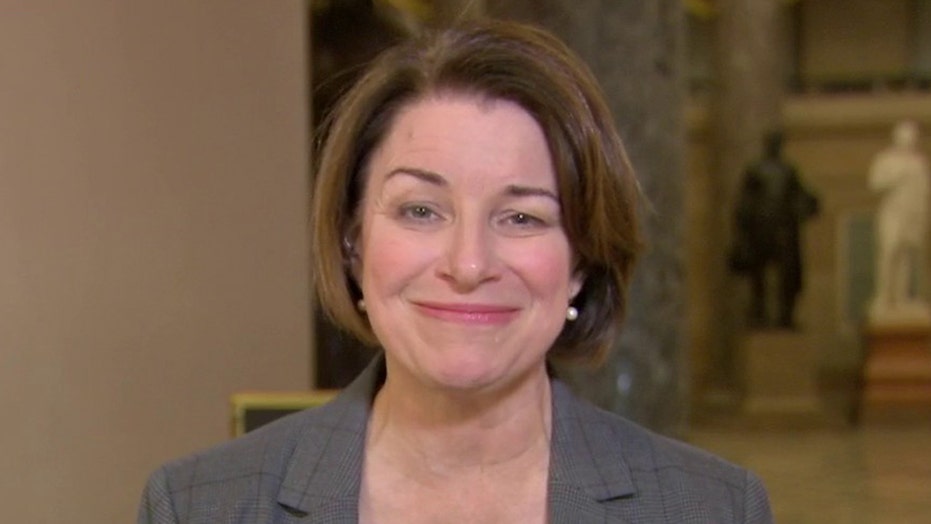 Sen. Amy Klobuchar reacts to defeat of motion to call witnesses at Senate impeachment trial, looks ahead to Iowa

"I really thought we should have witnesses, and you could see [Sen.] Mitt Romney [R-Utah] has been outspoken about this for quite a while," Klobuchar said. "I think the reason is this: the truth is going to come out and people could vote the way they want on impeachment."

"And I really believe with the [John] Bolton revelations that have come out, it's not going to be five years from now that we know what happened in those rooms," Klobuchar added. "It's going to probably be five days from now or five weeks from now. And I think it is better to get testimony under oath and then people can make decisions."

Hours after Klobuchar spoke to Fox News, the Senate voted to approve a framework laid out by Senate Majority Leader Mitch McConnell, R-Ky., that set closing arguments in the case for Monday and a vote on the final verdict for Wednesday.

"I would like to do whatever... it takes to get a fair trial for the people of America," Klobuchar said. "And we are just awaiting word on what we work out here."

Baier asked Klobuchar whether she and the other senators running for president who have been stuck in Washington during the impeachment trial had the urge to rejoin the campaign trail, a question Klobuchar dismissed.

"That just can't be my motivating force, Bret. I've got to bet that the people in Iowa understand that I'm doing my job. I'm in the arena," Klobuchar said. "You know, other people can say, I don't want to look at what's going on there. I've got to do my job and get to the truth."

"I just don't think that people are going to hold that against me," Klobuchar added. "I think my experience passing over a hundred bills by working across the aisle more than anyone in the Senate running for president, I think that's going to matter."