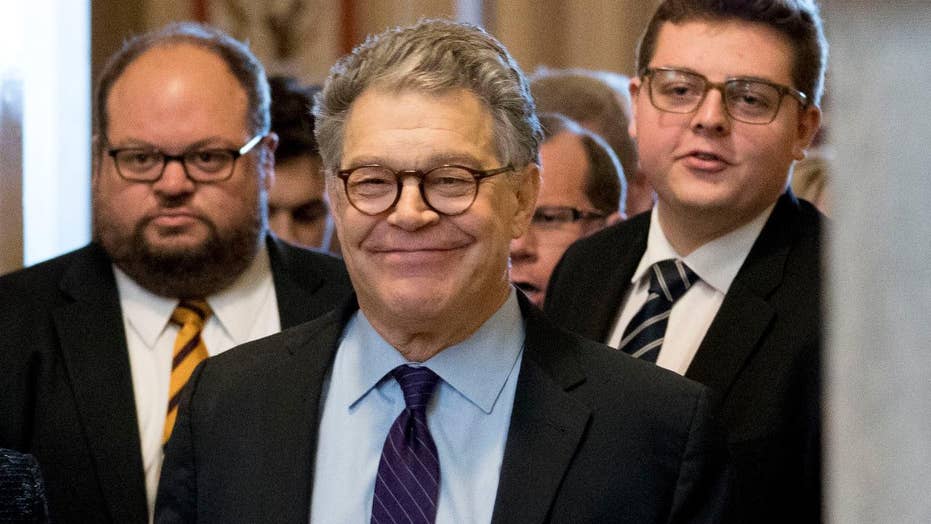 Jane Mayer vilified Kavanaugh during his hearings but defends Franken despite accusations against him; reaction from 'Justice on Trial' co-authors Mollie Hemingway and Carrie Severino.

Former Sen. Al Franken, D-Minn., will return to the public eye with a weekly SiriusXM radio show starting on Sept. 28, the company announced on Wednesday.

Franken famously resigned from Congress in 2018 over groping allegations at the height of the #MeToo movement, following high-profile claims against Hollywood mogul Harvey Weinstein, NBC News star Matt Lauer and others.

Franken was accused of acts of sexual misconduct, including claims by Leeann Tweeden, who said the Minnesota Democrat groped her and kissed her against her will during a USO tour in 2006. A photo emerged of Franken smiling as he appeared to touch Tweeden’s breasts while she was sleeping. Tweeden eventually accepted Franken’s public apology.

SiriusXM's “The Al Franken Show” is billed as a series of “thought-provoking conversations with headliners and experts in the fields of politics, entertainment, media, technology, global affairs, and more,” with comic legend Chris Rock scheduled to be the debut guest.

“I’m excited, Franken said in a statement. “Listeners can expect a mix of guests from my comedian friends like Chris Rock, to my political pals like former Senate Majority Leader Harry Reid, to policy experts on the issues in play in 2020.”

SiriusXM’s Senior Vice President of News Megan Liberman called Franken “an important and influential progressive voice” who has been missed since he stepped away from public office.

SiriusXM is the perfect platform for the former "Saturday Night Live" writer and performer to "re-enter the public conversation," Liberman said.

“When I’m interviewing Harry or former Energy Secretary Ernest Moniz, I’ll be the funny one. When I interview Rock or Patton Oswalt, I’ll be the one who served eight-and-a-half years in the Senate,” Franken added.

Franken is also expected to partake in SiriusXM’s coverage of the 2020 presidential race, including debates, primaries, and Election Day analysis.

Several Democratic lawmakers have said they regret calling on Franken to step down, but Kristen Gillibrand, D-N.Y., has stood by her initial stance.

“It's not OK to forcibly kiss a woman ever without her consent,” she told "Fox News Sunday" anchor Chris Wallace in June.