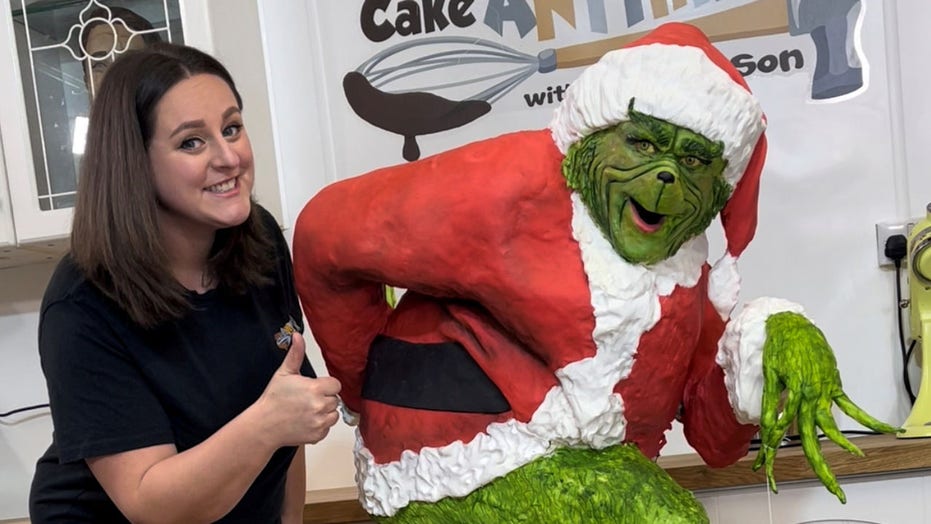 This cake grew three sizes while being baked.

A baker in England caught the attention of her favorite actor after baking a cake designed to look like one of his most iconic roles. The nearly life-size dessert weighed in at 250 pounds and was completed in just three days and was completed just in time for Christmas.

Lara Mason, who runs a baking company called Cake Anything, based the design of her cake on Jim Carrey’s appearance in the 2000 classic Christmas movie "The Grinch." (SWNS)

Lara Mason, who runs a baking company called Cake Anything, based the design of her cake on Jim Carrey’s appearance in the 2000 classic Christmas movie "The Grinch," Southwest News Service (SWNS) reports. Mason had originally planned to spend 17 days making the cake but had to shorten that to just three days due to some last-minute health issues.

"It was certainly a challenge to give myself just three days to complete with this especially with recovering from surgery, having Covid and two small children," Mason told SWNS. "I had tried to make a Grinch cake about nine years ago, and that didn't quite go to plan, so I wanted another shot at it. This time it turned out really well. This time, I wanted to get it right. We started with an internal frame which was made by my husband, and we started to slowly build around that."

Jim Carrey shared the video on his social media, joking that it was his goal to be eaten by his fans. (SWNS)

She continued, "It is made out of normal sponge cake which was the stacked-on top of each other; between each layer is vanilla and chocolate frosting. It is then covered with chocolate ganache, which is left to set and go firm. Then I used muzzling chocolate which is golden syrup and white chocolate which because like an edible plasticine."

Mason used cocoa butter and food coloring to paint the cake. Aside from these details, however, she plans on keeping the recipe a secret.

When she uploaded footage of the cake online, however, it was noticed by the Grinch himself.

"I got a call from my friend who said that Jim Carrey had tweeted a link to my YouTube Channel," Mason said. "I was in complete shock; he is my favorite actor. My video had only been seen by two thousand people and one of those was Jim Carrey - it was mind-blowing."

Carrey shared the video on his social media, joking that it was his goal to be eaten by his fans.

"After he shared it, it has had over 20 million views on TikTok," Mason explained. "You know you have done a good job when you see your stuff go worldwide."

Originally, Mason planned on cutting the cake up and serving it at her kids’ school. Unfortunately, since she had COVID-19, that can’t happen at the moment. Instead, she plans on feeding the cake to local animals instead.