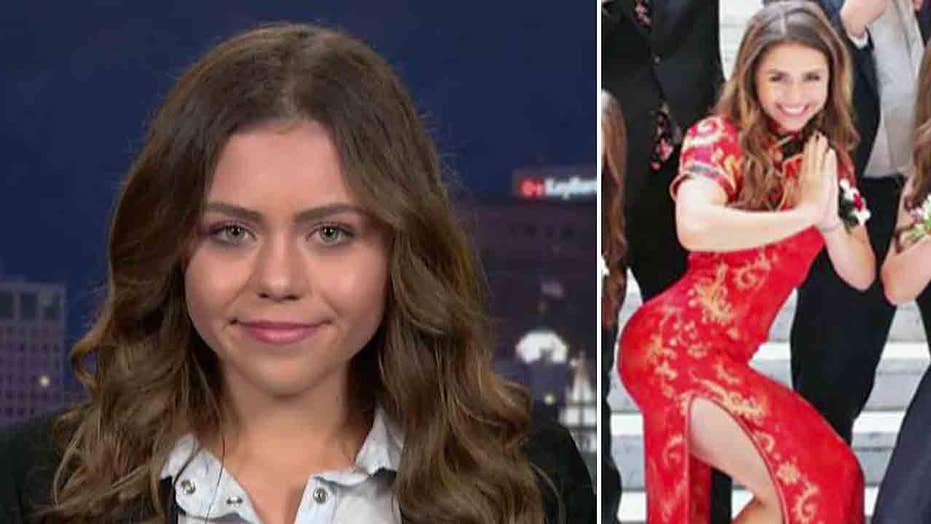 Teen responds to criticism over prom dress and pose

When Keziah Daum sported a traditional, Chinese cheongsam dress to her senior prom in Utah last month, she likely never intended her photos to go viral or be slammed as a “closet racist” over accusations of cultural appropriation. But days later, the 18-year-old began winning praise from an unexpected source — Chinese audiences and social media users.

“Very elegant and beautiful! Really don’t understand the people who are against her, they are wrong!” a supporter chimed in of the cheongsam, otherwise known as a qiapo. “I suggest the Chinese government, state television or fashion company invite her to China to display her cheongsam!”

“It is not cultural theft. It is cultural appreciation and cultural respect,” another agreed.

SCHOOL CLAIMS 'MODESTY PONCHO' WAS NOT MEANT TO BE WORN BY STUDENTS, BUT TO 'REMIND' THEM OF PROM DRESS CODE

According to the Post, Daum’s story has been making waves across Weibo, a Twitter-like platform popular in China.

“Culture has no borders. There is no problem, as long as there is no malice or deliberate maligning. Chinese cultural treasures are worth spreading all over the world,” one user mused.

Stateside, Daum has also won compliments for her prom dress, some from people claiming to be of Chinese ethnicity.

“I am a Chinese woman. I support you. You rocked that dress!! I have an 18 year old daughter who just had her prom. She said people might be just jealous that you look awesome in that dress," wrote one woman on Twitter.

Appearing on “Fox & Friends” on May 2 to discuss her story and respond to critics, the high schooler said she never meant to “mock” Chinese culture by wearing the traditional frock to the dance, but instead, to celebrate it.

“I feel that there’s a difference between wearing something with a different intent, because I personally, I wore the dress because I really respect the culture, and I believe it is very beautiful," Daum said. "And I wanted to show my respect and love by wearing [the] clothes in admiration of them.

The qipao is thought to be adapted from the style of Manchu women living during the Qing dynasty of 1644 to 1912, the Post reports. Falling out of the mainstream in the mid-20th century, it has made a comeback in recent years in a nod to traditional Chinese culture. Peng Liyuanm the first lady of China, has worn a qipao several times during official visits in recent years.

Amid all the backlash she got for her dress, however, Daum has no regrets.

“I would definitely wear it again,” she told Fox News.