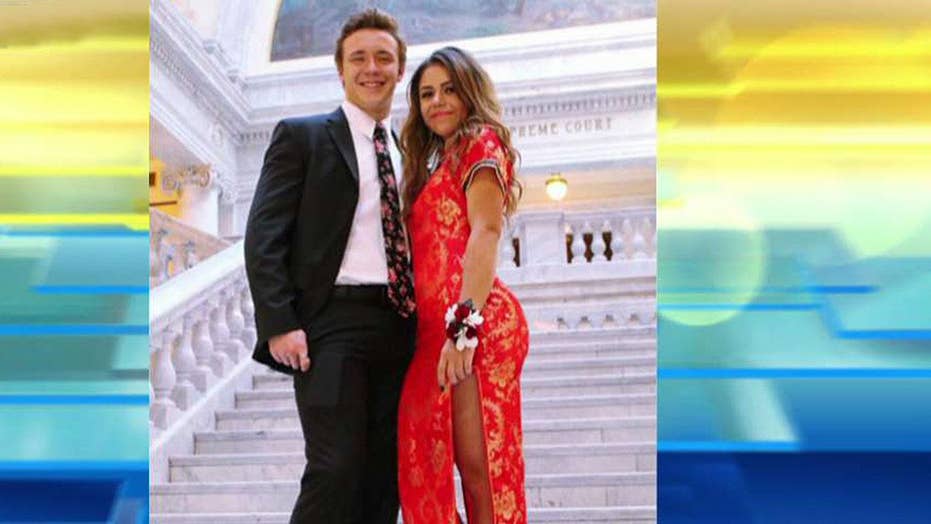 18-year-old Keziah Daum was accused of cultural appropriation for wearing a traditional Chinese cheongsam dress to her high school prom.

Keziah Daum is not apologizing for wearing what she calls a "beautiful" Chinese cheongsam dress to her high school prom, despite receiving backlash from thousands of people online, some of whom called her a "closet racist" and accused her of cultural appropriation.

Daum, 18, posted an album of four prom pictures on Twitter on April 22 with the simple caption, "PROM." One of the photos in the album includes Daum crouching down in the traditional Chinese dress, posing with a group of her friends with their hands folded together — a gesture many deemed inappropriate.

It didn't take long for the Internet to respond. As of Monday evening, Daum's post has been retweeted nearly 4,400 times and now she's fielding hundreds of angry comments.

"What's the theme of your life? Ignorant?" one user asked.

"Oh god! The pose is just the cherry on top of this casually racist post. It's not just a dress, it's something that means something historically and traditionally to the Chinese," another added.

Another simply called her a "closet racist."

But the teenager, who reportedly attends Woods Cross High School in Utah, defended her decision to wear the red-orange embroidered gown. And said she would wear it again to show her "respect" for the Chinese culture.

"To everyone causing so much negativity: I mean no disrespect to the Chinese culture. I’m simply showing my appreciation to their culture. I’m not deleting my post because I’ve done nothing but show my love for the culture. It’s a f---ing dress. And it’s beautiful," she tweeted on Saturday.

She then added, "To everyone who says I’m ignorant, I fully understand everyone’s concerns and views on my dress. I mean no harm. I am in no way being discriminative or racist. I’m tired of all the backlash and hate when my only intent was to show my love."

"I’m tired of all the backlash and hate when my only intent was to show my love."

But some followers didn't think Daum had the right to determine whether the gesture or dress was racist or not.

"If you’re not Chinese don’t decide whether it’s racist or not," one Twitter user replied.

"If you're not Chinese then you have no right to speak up about this," another echoed.

Some called on the teen to simply apologize and "move on."

"I'm Chinese & think it's fine if u wore a qipao cuz it's pretty. But u need to apologize for the pose. It doesn't matter that u didn't mean any harm or that it wasn't ur idea," another agreed. "You did it cuz YOU were ignorant that it's offensive. Apologize for unintentionally mocking and move on," one Twitter user wrote.

"You’re trying to make yourself the victim when all you had to do was apologize and learn," another added.

Daum told INSIDER she spotted the dress in a Salt Lake City thrift store weeks before prom, and knew instantly that it was the one.

"I bought the dress because I thought it was beautiful and admired the beauty of the culture," she told the site.

She had no idea it would garner this type of response.

"I feel people have seen the photos and others' opinions and [have] viewed them in the wrong way. Making assumptions is something that has definitely caused a lot of this controversy and backlash," she told INSIDER. "I would like my critics to know that I have no ill intent against other cultures and that I was simply showing my appreciation."

Daum didn't battle her critics alone, however. Dozens of people reached out to support the young woman and blasted Twitter users for being "so sensitive."

"Peace girl doing a hell of a job spreading peace and love," one Twitter user replied.

"Why can’t we grow up and not be so sensitive about what someone wears. It doesn’t matter," another added.

As tensions continue to rise, so does Daum's Twitter follower count. The 18-year-old has gained thousands of followers since she posted the photos. As of Monday evening, she has more than 9,400 followers.

"Thank you to EVERYONE who has been messaging me about the dress. I’m trying to respond to as many as I can. Thank you for your kindness!" Daum posted on Sunday.