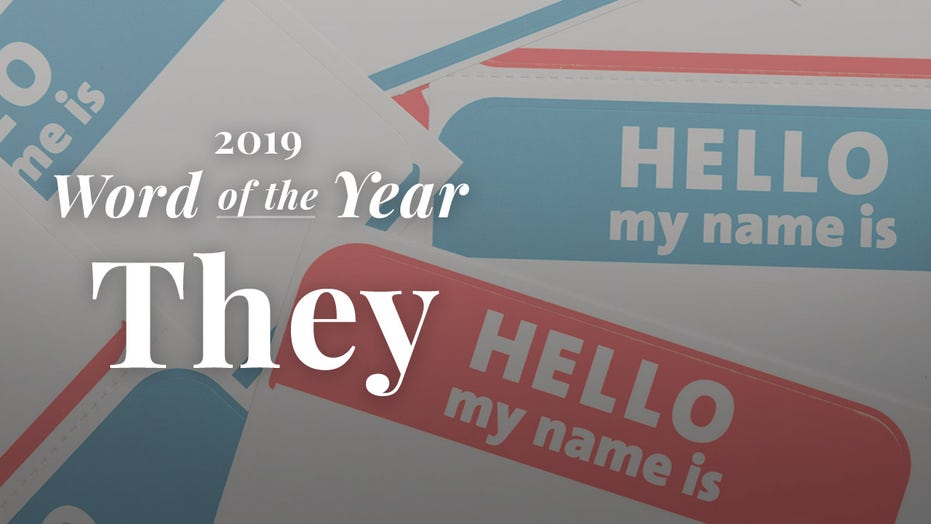 The small but mighty personal pronoun “they” has been declared the 2019 Word of the Year by Merriam-Webster, officials announced Tuesday.

“They” won the top spot on the annual, data-driven list after receiving a 313-percent search increase on the dictionary publisher’s website in comparison with 2018, the Associated Press reports.

In September, Merriam-Webster expanded the definition of “they” as relating to a person whose gender identity is non-binary. Weeks later, the American Psychological Association recognized “they” as a singular third-person pronoun in its latest scholarly writing style guide.

“Pronouns are among the language's most commonly used words, and like other common words (think go, do, and have) they tend to be mostly ignored by dictionary users. But over the past year or so, as people have increasingly encountered the non-binary use, we've seen searches for they grow dramatically,” Emily Brewster, Merriam-Webster senior editor, said in a press release. “People were clearly encountering this new use and turning to the dictionary for clarity and for usage guidance.”

“They” seized the spotlight and reportedly drove people to the dictionary after non-binary model Oslo Grace rocked the catwalk at Paris Fashion Week in January, Rep. Pramila Jayapal (D-Wash.) spoke about her gender-nonconforming child while advocating for LGBTQ rights legislation during a House committee hearing in April and historic Pride celebrations were commemorated in June, per the release.

In September, pop star Sam Smith revealed on social media that their preferred pronouns were “they” and “them,” an announcement inspired by a “lifetime of being at war with my gender."

“Through the dictionary, we see proof that words matter, whether we are discussing national politics or personal identity," Peter Sokolowski, Merriam-Webster editor-at-large, said. (Merriam-Webster)

Commenting on Merriam-Webster’s Word of the Year, Nick Adams, director of transgender representation for advocacy group GLAAD, said the selection of “they” was a positive step in the right direction for the greater LGBTQ movement.

“There is a long road ahead before language, policy and culture are completely affirming and inclusive,” Adams said.

Runner-up terms on the latest installment of Merriam Webster’s list include “quid pro quo,” “impeach” and "crawdad,” the latter following the bestselling success of Delia Evans’ novel “Where the Crawdads Sing.”

“Camp,” the theme of the Metropolitan Museum of Art’s annual gala in the spring, also spiked, while “the” trended when The Ohio State University failed to patent the word to protect its turf.

Other top 10 phrases also included “egregious,” “clemency" and “snitty,” as mentioned by Attorney General William Barr referencing a letter by Robert Mueller about a summary Barr wrote of the Mueller report.

“We have come to expect words from politics and big news stories to be looked up in large numbers, but this year we also saw a new focus on questions about words that were themselves the news. Seeing such interest in they and the shows interest in the basic building blocks of language,” Peter Sokolowski, Merriam-Webster editor-at-large, said of this year’s list. “Through the dictionary, we see proof that words matter, whether we are discussing national politics or personal identity.”

In related headlines, Dictionary.com recently named "existential" as its 2019 Word of the Year, while the Oxford Dictionaries chose "climate emergency" and Macquarie Dictionary, an Australian English dictionary, selected “cancel culture” for their respective words of the year.