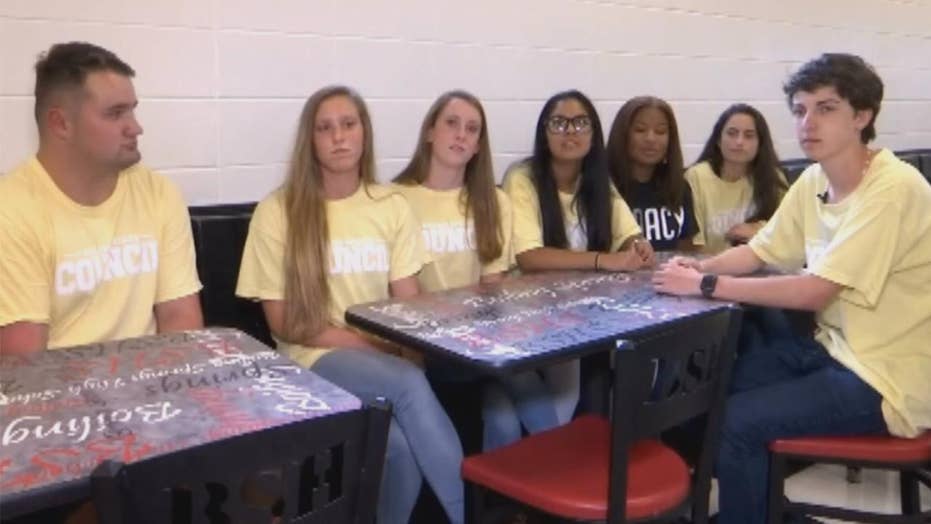 For the past four years or so, without fail, 16-year-old Andrew Kirby would get the same text from his mom at lunchtime: "Are you sitting with anyone?" And every time, Kirby gave her the same short answer: "No."

Kirby would sit at a table alone, hoping no one would notice he was by himself as he hid behind his cell phone. His mom, Kay, prayed daily he would make a new friend — but somehow, she always ended up disappointed.

This year, on Kirby's first day back as a junior at Boiling Springs High School in South Carolina, Kay's prayers were answered.

Kirby took a seat by himself at a lunch table on Aug. 20. As usual, he got a text from his mom asking if he was alone. But this time, to Kay's surprise, Kirby didn't answer.

Hours later, when she arrived to pick him up, she found out why.

"This has given him confidence. He wants to go to school now."

Kirby explained he was sitting by himself at lunch when he was approached by four student council members who asked him to join them at their table. Kirby happily agreed.

"It's been a constant over the years. He has sat alone and its always bothered me and my husband. I can picture him sitting by himself," Kay told Fox News, adding she now feels a sense of relief. "Over the years, he's had administration ... staff [sit by him], but he's never had his own peers."

Kay revealed Kirby was adopted. He was born with a crack cocaine addiction and has neurofibromatosis — a genetic condition that causes tumors to grow along the nervous system, according to the Mayo Clinic. The teen has overcome many health issues in recent years, including major back and neck surgeries.

Kirby considers himself shy, but once you get to know him, Kay assures people he's far from quiet. However, Kay admitted, someone has to make an effort to get to know him — which is why she's thankful the Boiling High students stepped up.

"We just wanted to say thank you to them for not being afraid to be a friend to someone," she said. "I would cry when I would leave him at school. It gives me peace and it just helps me as a mother [to see him with friends]."

Kay shared the students' act of kindness on her Facebook page later that day, along with a photo of her son. The image has since been shared nearly 4,000 times and received more than 1,000 comments.

Andrew Kirby poses for a picture as he begins his junior year at Boiling Springs High School in South Carolina. (Kay Kirby)

"This is heartwarming. I hope it continues and they become friends. I also wish for others to see this and begin reaching out to spread love kindness, and friendship. We need more of that in the world," another added.

Damian Howarth, one of the students who invited Kirby to sit with him, told WHNS he was shocked to hear Kirby had sat alone for so long.

"We should have stepped up before and more people should have, too," Howard said, sharing some advice for other students. "Don't be afraid to meet someone new. Just go out and do it."

Kay said Kirby now sits with the kids regularly. He even went to the movie theater with them on Saturday.

"He's doing really good. This has given him confidence. He wants to go to school now," she added.