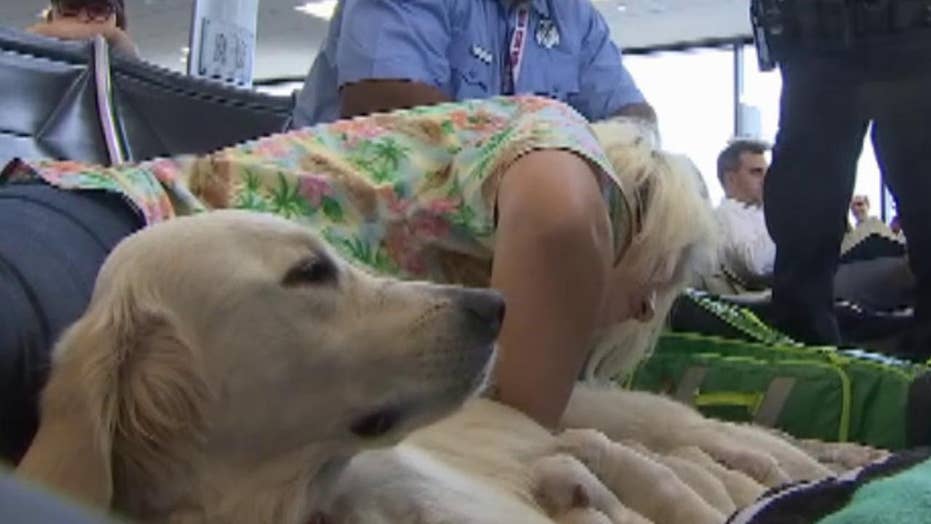 Service dog waiting to board a flight at the Tampa airport welcomes a litter of puppies.

A service dog unexpectedly went into labor shortly before she and her two owners were slated to board a flight at the Tampa International on Friday.

The 2-year-old yellow lab, Eleanor “Elle” Rigby, (named after The Beatles song of the same name), gave birth to eight puppies -- seven males and one female, according to the Tampa Fire Rescue.

The puppies’ father, a yellow lab named Nugget who is also a service dog, was also at the airport at the time of the birth.

Personnel with the Tampa Fire Rescue, which documented the birth on Twitter, helped Elle to deliver her puppies.

An airport spokesperson told Fox 35 that a woman and her daughter were flying from Tampa to Philadelphia. They were aware that Ellie was pregnant, but didn't realize how far along she was.

Due to the unexpected birth, the woman and her daughter missed their flight. They now plan to drive from Tampa to Philadelphia -- roughly 1,000 miles -- with their 10 dogs, the Miami Herald reported.