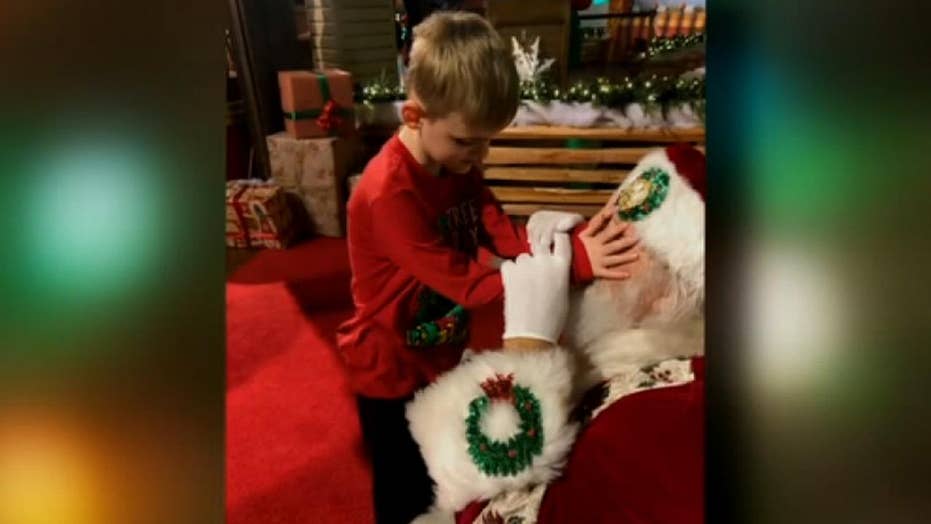 Photos of Texas boy, who is blind and autistic, getting to 'see' Santa for the first time go viral.

The guy in the flashy red suit gets all the glory. But in Santa Claus, Ind., it takes a village of little helpers to keep the St. Nick legend alive.

Ever since the tiny Midwestern town — population 2,411 — was featured in “Ripley’s Believe it or Not” in 1930, the United States Postal Service started “unofficially” forwarding letters to Santa there.

With Santa busy with Christmas preparation, his team of “elves” steps in to tackle the overflowing mail bag.

“We get letters from all over the United States — and almost every country,” chief elf Pat Koch, 87, tells The Post. “Santa letters, even if they’re addressed to the North Pole or the Arctic Circle, they come to Santa Claus, Ind.”

MOM HITS BACK AT TROLLS WHO SAY SPENDING $2,000 ON CHRISTMAS PRESENTS FOR 3 KIDS IS TOO MUCH

According to postmaster Marian Balbach, the town receives 20,000 to 25,000 letters to Santa annually. Koch leads her team of all-ages volunteers toward a lofty goal: Making sure each child gets a personalized letter from the big guy. Her elves say she runs a tight ship.

“I do believe that organization is important to achieve what we want to achieve,” Koch says, matter-of-factly.

Her methods get results: On day five of the big holiday push, postal boxes are already overflowing with 4,000 letters signed, sealed and waiting to be delivered.

One rule the crew follows? To never make promises they can’t keep.

“I actually had a child ask for a cow this year. Santa’s elf here did not promise a cow,” says elf Joyce Robinson, 72, who segued into elfhood after 20 years as a librarian.

She’s had to answer some tough questions, too.

“Every single letter stays with you,” says Robinson. “One young man, he was handicapped, and [his letter] starts out, ‘Dear, Santa, please tell my parents I’m handicapped — not stupid,’ ” she says, tearing up.

Her personal favorite letters come from children whose parents are deployed. “I make sure and say, ‘When I fly over Afghanistan or Iraq, I’ll dip down and see how daddy’s doing, OK?’ ”

It’s all part of keeping the magic of Christmas alive, says Koch, who started answering letters in 1946 when her dad became known as the “Real Santa” of Indiana’s Santa Claus Land, the world’s first theme park, now known as Holiday World.