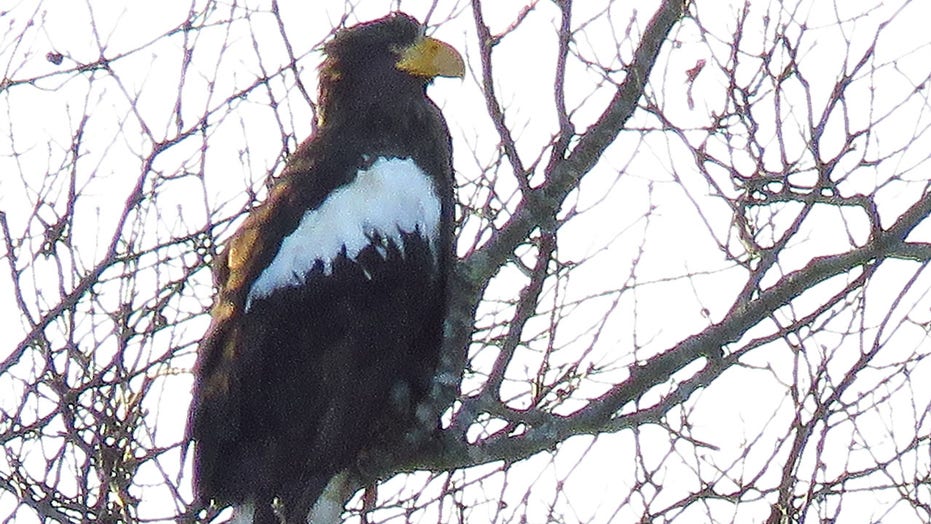 There’s something you don’t see every day.

A rare eagle was spotted near a river in Massachusetts last week. According to state officials, the bird is believed the same one that was spotted as far away as Alaska.

A Steller’s sea eagle perched in a tree branch along the Taunton River. The Massachusetts Division of Fisheries and Wildlife posted about the sighting on Facebook, writing that it's believed the bird is originally from Asia.

One of the largest raptors in the world, the Steller’s sea eagle can weigh up to 20 pounds and have a wingspan of up to eight feet.

WISCONSIN WINTER WOLF HUNT MAY NOT BE HELD THIS SEASON

Prior to the most recent sighting, the eagle had been spotted in Nova Scotia. (iStock)

The Massachusetts Division of Fisheries and Wildlife wrote, "Last week, a rare Steller’s sea eagle was spotted along the Taunton River in Massachusetts, thousands of miles away from its home in Asia. This sea eagle is one of the largest raptors in the world, weighing up to 20 pounds with a wingspan of up to 8 feet! This is likely the same eagle that was observed in Alaska and Canada."

The division cited a report from Smithsonian Magazine that details the movements of a rogue Steller’s eagle.

This particular eagle is believed to have also been spotted in Alaska. (iStock)

The eagle has been spotted in Texas and Alaska. Before the most recent sighting in Massachusetts, the last sighting of the bird occurred in Nova Scotia in early November.