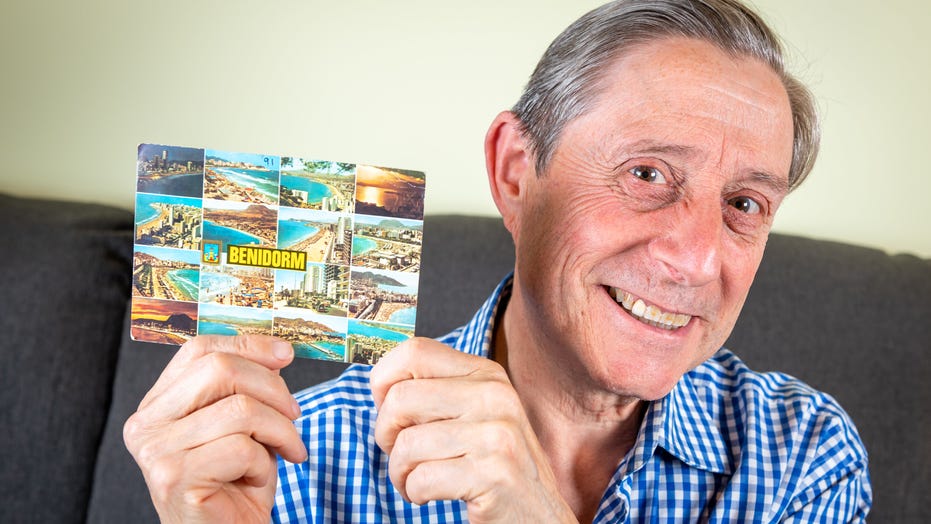 A decorator was left stunned after he received a postcard he had sent to his parents while on holiday in Spain — 28 years ago.

Jim Green, who lives in his parents' former home, was rifling through his mail earlier this month when he discovered a postcard from Benidorm dated September 1991.

Baffled, Jim, 66, took a closer look and realized it was a postcard sent from his former 39-year-old self to his parents letting them know he had arrived safely on his holiday.

Jim Green told SWNS, " I looked at the date and realized it was 28 years late! I was amazed!" (SWNS)

Jim lives at the family home in Braintree, Essex, with his decorator brother Christopher Green, 61, and Christopher's partner Anna Dollimore, 59 who is a full-time carer for her mom.

The postcard arrived on Thursday morning (Oct. 17), while Christopher was watching TV.

Jim said: "I picked up the letter and my first thought was: 'Who is in Benidorm?' Then I looked at the date and realized it was 28 years late! I was amazed!

"Then I realized that I had written it to tell my parents I had arrived to Benidorm safely.

"When I was younger I used to go on holiday. I remember I was single at the time and I went with my friend who was also single and a married couple.

"I can't really remember writing it but I know I would have sent it fairly early on in the holiday.

"With these kind of things, you always say it's a great holiday but actually it wasn't good at all! We were quite on a high floor in the hotel and we couldn't get hot water — in fact, we were struggling to get cold water!

"We had to buy bottles of water just to wash. Eventually we got it sorted, I think we actually moved rooms!

"One day, we went down the road and we went into this bar. We all fancied strawberries in cream but it wasn't a good idea because we all had tummy bugs. My friend had it for quite a while!"

Jim's mother, Winifred, died five years ago and his father, Christopher, died in 1997.

He said: "My dad would have just said: 'Well that's just the post for you!'

"They never really went abroad on holiday, they used to go to the seaside at Clacton or Maldon or go on coach trips. I think at the time there weren't many people that went away for holidays.

"I suppose it gave them an idea of what Benidorm looked like."

Generations of Jim's family have lived in the Essex neighborhood of Finchingfield, going back as far as the mid-1800s.

Jim lived with his parents before taking over the tenancy of the family house after his mother died.

Although the surprise delivery certainly put on a smile on Jim's face, he is still none the wiser as to why it appeared on his doormat so late.

"I'm still trying to figure out why the delay was that long, I don't think we'll ever know what really happened. I think it would be pretty hard to trace it back."

The postcard, which has pictures of sunny Benidorm on the front, now takes pride of place on his mantlepiece next to a Victorian clock owned by Jim's grandfather.

A spokesman for Royal Mail said: "It is difficult to speculate what may have happened to this item of mail, but it is likely that it was put back into the postal system by someone recently, rather than it being lost or stuck somewhere.

"Royal Mail regularly checks all its delivery offices and clears its processing machines daily. Once an item is in the postal system then it will be delivered to the address on the card."