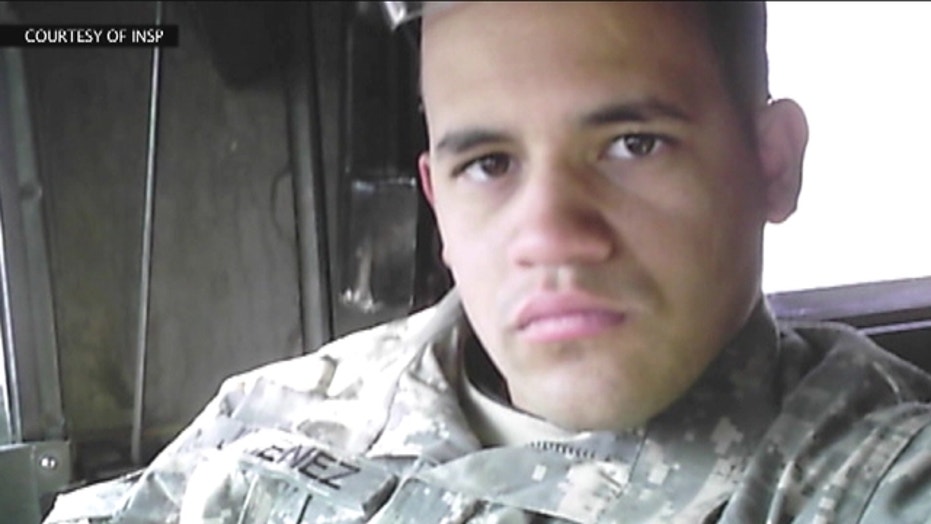 A new TV show tells the stories of fallen soldiers returning home through the art of painter Phil Taylor.

When Maria Jimenez wakes up in the morning, one of the first things she sees is a painted portrait of her late son, Staff Sgt. Alex Jimenez.

She notices his eyes – how alive they seem – and his nose, which was something his brothers would always make fun of. In moments like this, Maria Jimenez feels like her son is still with her.

“It’s emotional when I see him," she told Fox News Latino. "It's just like if he was still alive.”

The painting by artist Phil Taylor is part of the American Fallen Soldiers Project. The story behind Staff Sgt. Jimenez's portrait will be showcased on INSP Network's new show "Brush of Honor" tonight at 9 p.m.

Staff Sgt. Jimenez, who was Dominican-American, died in May 2007 when his platoon in Iraq was ambushed by insurgents. He and two of his fellow soldiers – Private Byron Fouty and Private 1st Class Joseph Anzack – were captured and then killed. It would be 18 months before Jimenez’s family would hear anything about him.

“It was terrible. I was outside, grocery shopping. When I came (back), my sister told me, ‘Three soldiers from the Army were taken,’” Maria Jimenez recalled to Fox News Latino. “It was very hard to handle … it’s our son.”

According to his mother, Jimenez always dreamed about joining the military and serving the country where he was born. He went as far as writing a letter while still living in the Dominican Republic, asking the U.S. Army to let him enlist so that he could serve and help those in need.

It was a desire and a passion that was instilled in him from a young age, his mother said, and that remained with him until he was old enough to enlist.

“When he told me, I immediately asked him why he didn’t choose a different career path,” she said. “He told me, ‘No mom. This is the career that I love and I will go to Lawrence, Massachusetts to enlist.’”

At 18, he enlisted into the U.S. Army and by the age of 25 had risen the ranks to Staff Sergeant.

“I was proud of him. He achieved something that he wanted to accomplish,” his younger brother Andy Jimenez told FNL. “He always used to tell me, follow your heart, do what you think is right for yourself, make yourself happy.”

He continued: “I am so proud of him. (Alex) wanted to be a hero and do this. That was his thing.”

Andy Jimenez said he never lost hope and faith that his brother would be found.

“It was hard. You don’t know where your brother is … I just maintained myself busy, trying to stay as positive as possible,” he said.

In July 2008, the U.S. Army found Jimenez and Fouty’s remains in a shallow grave about 20 miles from the ambush site. Anzack’s body was found days after the ambush in the Euphrates River.

Now, eight years later, the Staff Sergeant’s family have him back home thanks to Taylor's painting, which was unveiled to the Jimenez family at the 9/11 Memorial Museum in New York City.

Andy Jimenez could only praise Taylor for his work, saying that the attention to detail made it seem like his brother was actually there.

“It brought comfort to us as a family,” he said. “It was mixed emotions.”