PAMPLONA, Spain – It's that time of the year again when thousands of people race through the streets of Pamplona, Spain on the famed 'running of the bulls' that are at the center of the Fiesta de San Fermín.

There were no gorings in the second bull run Monday, although four people were treated in city hospitals for injuries suffered in falls, Navarra Hospital chief Javier Sesma said. 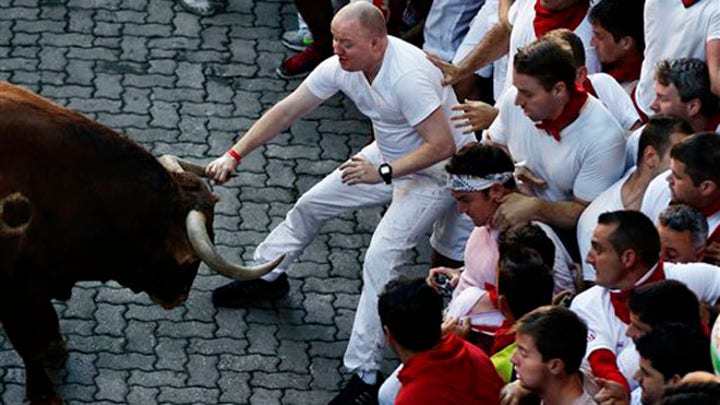 The early morning race saw thrill-seekers dashing alongside six fighting bulls and six bell-tinkling steers that try to keep the beasts together along the narrow 930-yard (850-meter) course from a holding pen to the city bull ring. It lasted just over two minutes.

The run is televised nationally and is the highlight of the nine-day street partying festival, which became world famous following the 1926 publication of Ernest Hemingway's novel "The Sun Also Rises."

"Never again," said Jonathan Chadwick, 31, an engineer from Auckland, New Zealand, who said it was his "first and last time" to run. "It was really scary," he said.

Ade Erinkitola, a 47-year-old IT worker from San Francisco said it was his first time but he'd be back.

"It was really exciting, my heart was beating really fast. I didn't know what to expect," he said.

Three Spaniards and a 41-year-old man from Pheonix, Arizona, were injured but none was in serious condition, according to the Navarra regional government press office.

The bulls that are run each morning are invariably killed in evening bull fights, and their meat is served up in Pamplona's restaurants.