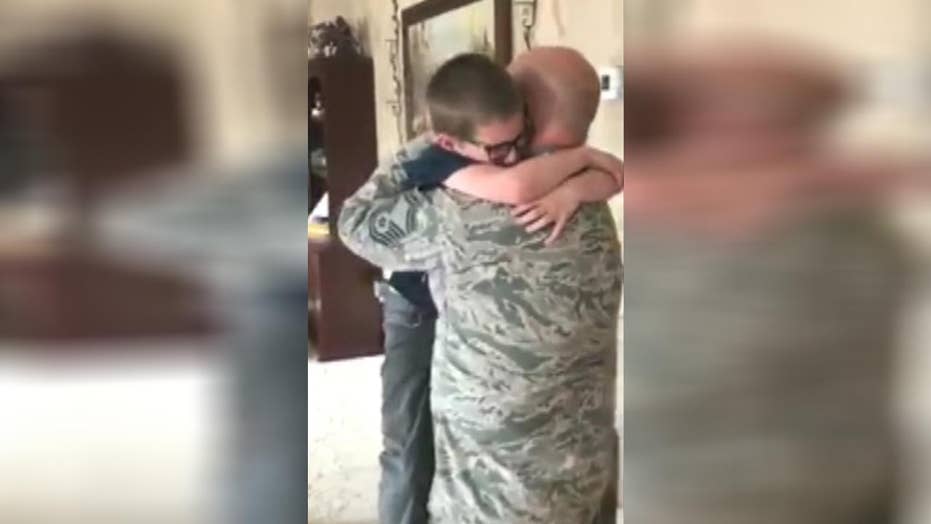 SMSgt. Mark Coffelt surprises 8-year-old son after his return to the 69th bomb squadron is delayed.

SMSgt. Mark Coffelt with the 69th bomb squadron arrived home from Qatar late Tuesday, hours after his expected arrival time. By the time Mark’s wife, Aleecia, picked her husband up from the airport, 8-year-old Ronin was already asleep.

As a result, Aleecia decided to surprise her son with his father’s homecoming when he got home from school on Wednesday, she told Fox News.

Ronin had been asking Aleecia “for the last three months” when his father was coming home, and whether he would make the boy’s birthday on May 6. In order to surprise her son, Aleecia wrapped a fake letter in a series of boxes to dupe him into thinking his father wouldn't be back anytime soon.

Ronin “always calls me out,” his mother said, which is why “it was killing me” when the 8-year-old was so upset by the letter.

“[Mark] said that his heart was also breaking when he read the letter; I could see a tear in his eye,” she said, adding that her husband is “tough” but a “softie when it comes to him [Ronin].”

But the young boy’s tears turned smiles after he read the word “surprise,” a cue for Mark to emerge from behind the wall where he was hiding.

This is the third time the airman has been deployed in four years, Aleecia said, adding that each time Mark has returned to the family’s Minot home she thinks of a way to surprise Ronin.

“The surprise was extra special [this time] because of the anticipation,” she said. That’s partly because Mark has been deployed for eight months.

“[When his father is gone] he sometimes cries himself to sleep at night, so this one was really touching,” she said.

Once the camera stopped rolling, Aleecia said Ronin stayed in his father’s arms for a while and asked, “why so many boxes?”

“It’s hard,” Aleecia said of the times Mark has been deployed. “While you can still talk to them -- we are so blessed with technology -- sometimes reception is not good,” she said. That's another reason why the family is so glad to have Mark back -- even if it's not for long.

“We hope to have him home for a while,” said Aleecia.