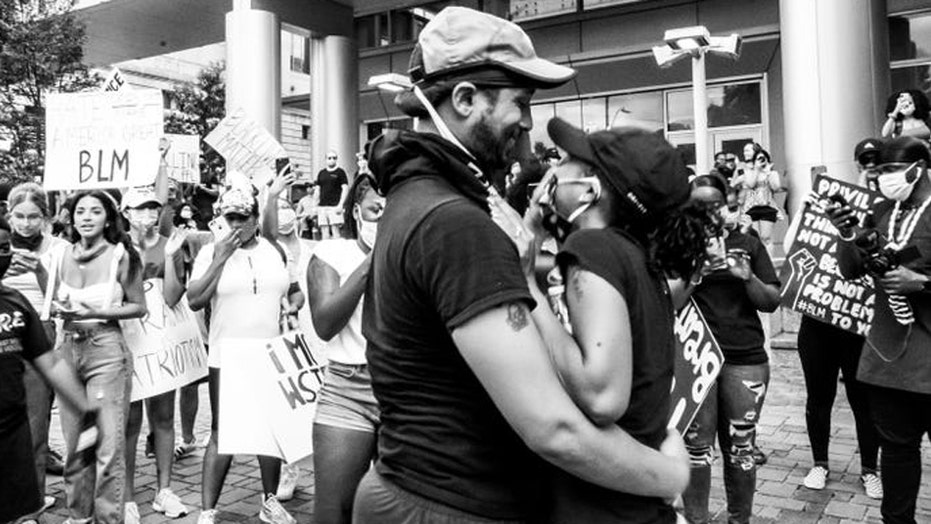 The future is bright for one North Carolina couple who recently got engaged at a Black Lives Matter protest.

Serendipitously, a nearby photographer quickly took now-viral images of the life-changing moment, which have been praised as uplifting amid a difficult week following the death of George Floyd while in police custody on May 25.

Xavier Young popped the question to Marjorie Alston at a protest last Saturday, and she said yes. The couple have been together for two years, and Young, 26, said he knew the time was right after seeing how passionate Alston, 23, was about attending the demonstration.

COUPLE GOT TATTOOS OF FUTURE WEDDING DATE BEFORE CORONAVIRUS CANCELLATION: 'ALL YOU CAN DO IS LAUGH'

"I never went out to protest before, but I was like, 'This is the time,'" Alston told Insider. "Seeing police brutality hits close to home because it could be anybody.”

The couple had been discussing an engagement, and Young said he couldn’t wait any longer.

“I knew I wanted to propose at the protest when she wanted to go,” he explained. “Going to the protest was entirely her idea. I felt like if she wants to go out there and get in the trenches, she's definitely the one.

The couple had been discussing an engagement, and Young said he couldn’t wait any longer. (4C Visuals Group)

"What better place and what better time?" Young added. "We're protesting something unjust and ugly, and I felt like I could bring some beauty and some light to the situation."

After protesting for more than an hour, the man seized the moment. Alston said there was levity in the crowd right before her now-fiancé got down on one knee.

"It was a very lighthearted moment of the protest," she recalled. "At this point, everyone was just chilling. The crowd was joking with each other. It was like walking with a big crowd of friends."

Though Young hadn’t planned for onlookers to react, he told People that passersby gathered “pretty dang quick” as they realized what was happening.

“She probably didn’t want the attention, but you know what? She deserved it,” he said.

"She probably didn’t want the attention, but you know what? She deserved it." (4C Visuals Group)

Coincidentally, photographer and filmmaker Charles Crouch of 4C Visuals Group happened to be nearby and captured footage of the heartwarming scene as onlookers celebrated.

"The great thing about it for me was that it wasn't just black folks around us celebrating," Young told Insider. "It was white folks, it was Hispanic folks, everybody that was there. It brought people together.

Crouch’s gorgeous black-and-white images of the proposal have since hit Instagram, where they have been praised as uplifting and inspiring.

“Great shots man! I was right next to you filming this scene… Such a beautiful moment,” one said.

“I so needed to see this. Congrats to the happy couple,” another echoed. “Wishing them a lifetime of love, happiness, and peace.”

Now, Alston and Young are looking forward to their happily ever after. The couple is expecting a baby in November, and plan to wed in September 2021.