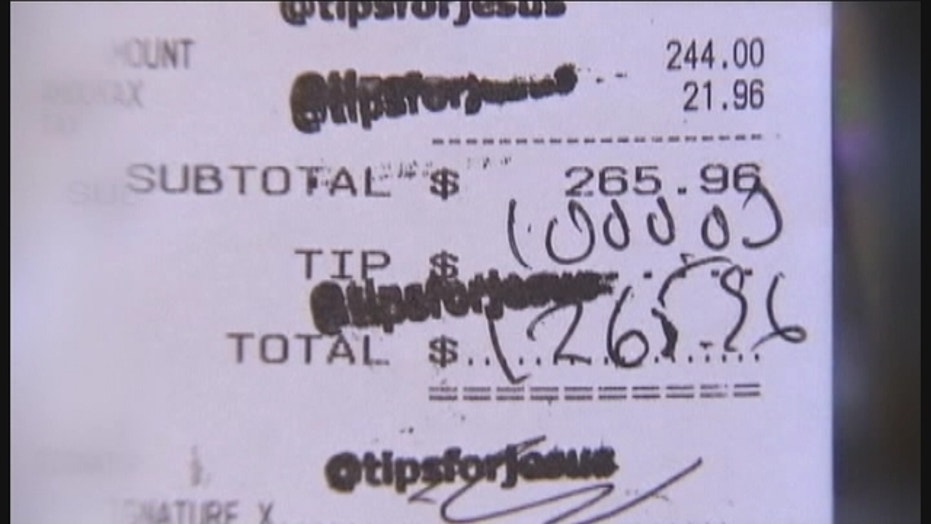 Mystery Tipper Leaves Thousands Of Dollars Around The Country

A mystery diner, or group of diners, has been leaving thousands of dollars in tips all over the country with '@tipsforjesus' stamps on it.

A mystery diner, or group of diners, has been leaving thousands of dollars in tips all over the country. A waitress at the Hungry Cat in Hollywood got a $1,000 tip a couple weeks ago. The restaurant showed us the receipt that had several @tipsforjesus stamps on it.  The best part is the staff shares tips, so several people got a cut!

"I think I was more nervous than anybody, because I pay them out at the end of the night.  But it went through, so they got their money... It's a mystery for sure, we're not sure. Apparently he's been in Utah, by Notre Dame, various places here in LA.  Right now I think it's just somebody wanting to be generous during the holidays," said Hungry Cat manager, Becky Graziano.

There's now an account on Instagram @tipsforjesus and they've posted several pictures of receipts including one with a $5,000 tip and another with a $10k tip.

Several of the restaurants say a group of three guys paid with an AMEX black card leaving left the huge tips.

So far the huge tips were left in Ann Arbor Michigan, to Chicago, and now, a group of them in Los Angeles. The Hungry Cat and Fig & Olive both got $1000. A $500 tip was left at stripper bar Jumbo's Clown Room.

Some of the lucky recipients of the gratuities describe the tipper as actually a group of three guys, who pay with an AMEX black card, and are football fans traveling around to different games.

For more stories go to myfoxla.com