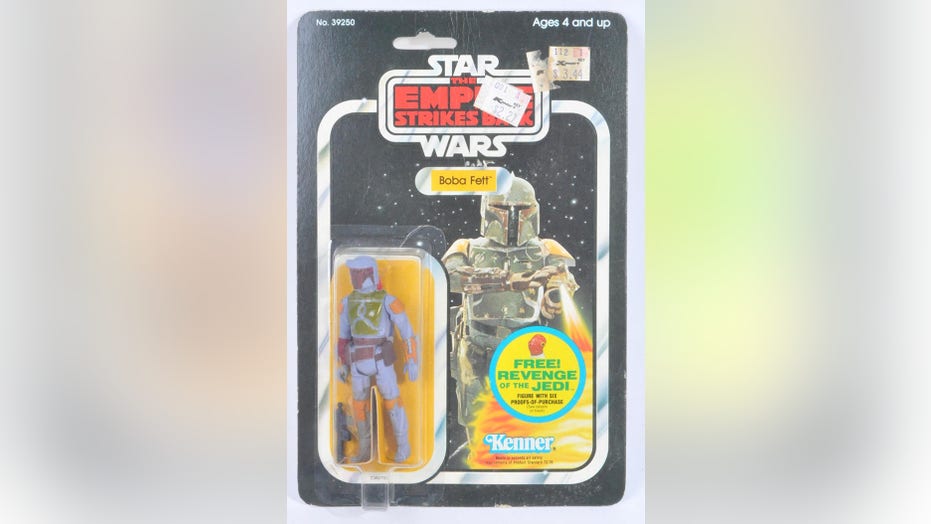 This collection was started a long time ago, but not in a galaxy far, far away.

A Star Wars fan is selling their collection of memorabilia, which includes over 1,500 autographs from cast and crew members and hundreds of unopened toys. The collection could potentially sell for over $90K when it is put up for auction next month.

A rare Empire Strikes Back ‘Boba Fett’ action figure is just one of hundreds of toys in the collection. (SWNS)

East Bristol Auctions is handling the sale, Southwest News Service (SWNS) reports. Auctioneer Andrew Stowe spoke with the news outlet about the collection, which is being sold by a private collector.

Stowe described the collection, which will go up for auction on Jan. 27, as being "difficult to match."

Since the first movie was released in 1977, Star Wars has become a massive brand that includes movies, video games, toys and even theme park attractions, such as the Rise of the Resistance attraction at Disneyland. (Joshua Sudock/Disney Parks)

He continued, "The haul is the private collection of a Bristol gentleman who collected the memorabilia for over thirty years. He was buying the original figures in the mid-nineties when they could be purchased for just a few pounds. Now some of those figures alone are worth over a thousand!"

While the collection includes an impressive number of toys, the autographs are described as being the main focus. It reportedly took 20 years to gather all the signatures and require the collector to seek actors and crew members down. This sometimes involved waiting by stage doors and attending various events.

A Star Wars script book autographed by over two hundred original cast and crew will be part of the auction. (SWNS)

"When I first met with the vendor, what I thought was a quick home visit turned into a morning out," Stowe explained. "When I just kept getting handed folder after folder of autographs, turning each page over revealed something else incredible. There were signed photographs that Star Wars fans would sell a limb to own!"

He continued, explaining the process of cataloging every item.