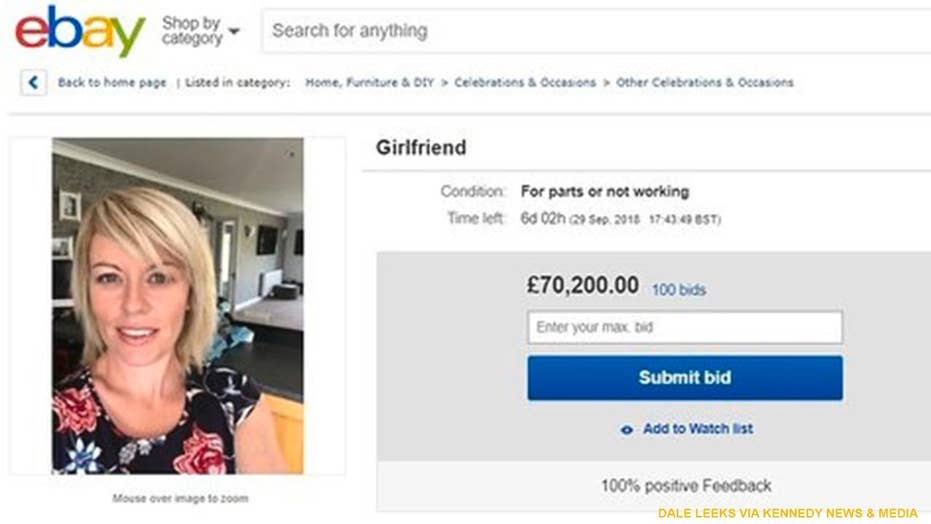 Man puts 'used' girlfriend on eBay as a prank

Dale Leeks, from London, thought it would be funny to list his girlfriend of one year on the auction site eBay. But the prank backfired when the bids reached over $119,000 within 24 hours.

A man who listed his girlfriend for sale on eBay as a prank was shocked when the bids reached over $119,000 within 24 hours.

Dale Leeks, who lives in London, “wanted to have a laugh” so he thought it would be funny to list his girlfriend of one year, Kelly Greaves, on the auction site, CTV News reports.

He described her condition as “for parts or not working” and wrote that she “starts OK but after that there’s a constant whining noise that I can’t seem to stop. Bodywork is fairly tidy but close up shows signs of wear. No serious damage but you can see that she’s been used.

“Please [bear] in mind when bidding she’s 37 years old. Basically first thing in the morning she can be very temperamental, once warmed up the whining noise lessens but I would be lying if I said it goes away completely. The rear end leaks a bit but nothing that can’t be plugged.

“Any offers considered…would be interested in a part exchange with a younger model. Sold as seen, no returns.”

When Leeks showed the listing to Greaves, she went along with the prank, thinking no one would see it. But when the couple went to dinner that night, Leeks’ cell phone started “going crazy” with hundreds of bids and crude messages from interested parties around the world.

The ad was removed by eBay after 24 hours for violating the website’s policy against selling human body parts or remains, but not before being seen 81,000 times.

For her part, Greaves said maybe it would’ve worked out because “if the new owner had that kind of money, then she was going to have a better quality of life.”