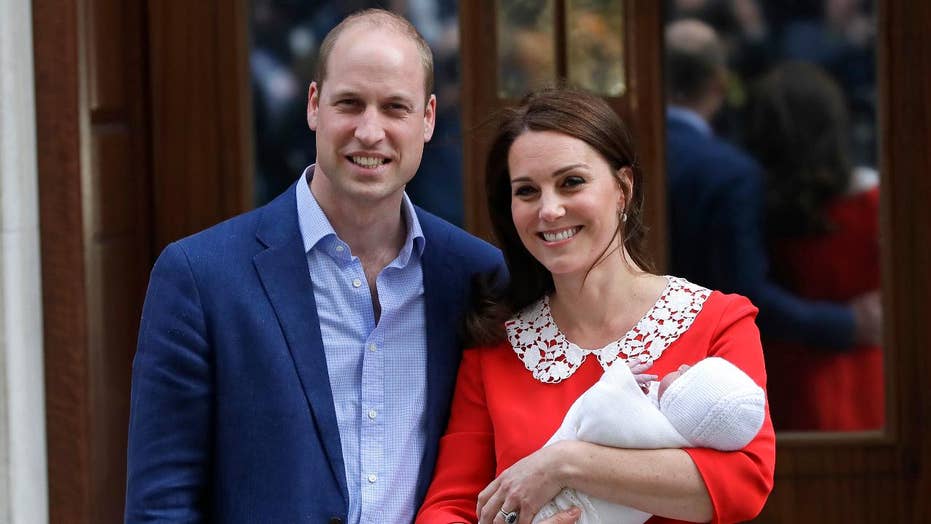 Duchess of Cambridge, Prince William step out with new baby

Prince William and the Duchess of Cambridge step out with the new baby boy after leaving the hospital.

The birth of Kate Middleton and Prince William's third child made huge news on Monday — and Kate's outfit reportedly had a huge price tag to match, too.

The dress Middleton wore outside the Lindo Wing of St. Mary’s Hospital on Monday — a knee-length red frock with a white lace collar — is estimated to have cost upwards of several thousand dollars, according to experts who spoke with Time.

Middleton's post-baby frock, made by designer Jenny Packham, could cost as much as $7,500, according to one fashion expert. (Reuters)

Designed by Jenny Packham, one of the duchess’ favorite designers and the creator of her previous two post-baby dresses, the garment was reportedly custom-made for Middleton. This makes it impossible to tell just how much it might have cost, but some fashion industry insiders think they have a pretty good idea.

“We can estimate a price range for a custom dress around $3,000-$7,500 based on her other well-known pieces,” style expert Dawn Del Russo, the founder of Bella Dawn, told Time. Another source for the site added that a bespoke Jenny Packham dress of that style — one not even commissioned by royalty — might usually go for “upwards of $2,500 depending on the time and fabric.”

In this case, however, it is not clear whether the dress was gifted to Middleton, or purchased by the royal family. A representative for Jenny Packham was not immediately available to comment.

It’s possible that Packham put extra care and thought into this particular piece, as it is being reported that both the color and the style are visual references to Middleton’s mother-in-law, Princess Diana. After Prince Harry’s birth in September 1984, Princess Diana, along with Prince Charles, stepped out from the same hospital wearing a red dress with a white collar.

Princess Diana, along with Prince Charles, left St. Mary's Hospital in London with Prince Harry on Sept. 16, 1984. Harry was born the day before. (Associated Press)

Us Weekly adds that Middleton’s dress color may also be a reference to the feast day of St. George, which fell on April 23.

Similarly, the dress Middleton wore after giving birth to Prince George in 2013 was said to be an homage to the dress worn by Diana after Prince William was born.

Middleton's blue gown upon leaving the hospital with Prince George in 2013 was also reminiscent of the polka-dot gown Princess Diana wore after giving birth to Prince William.

Kate’s pricey post-baby look didn’t end at her dress, either. According to Time, she paired the frock with a pair of Gianvito Rossi nude heels, which retail for $675.