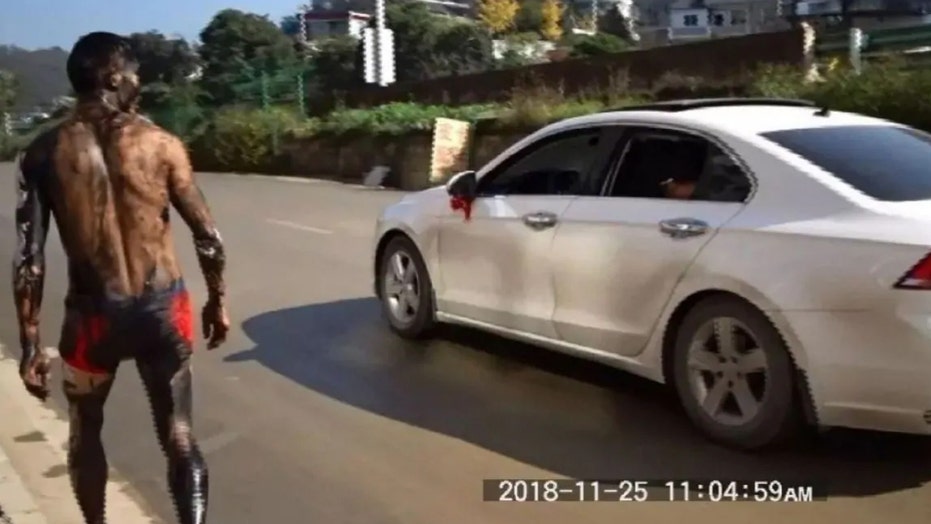 A newlywed in China is planning to sue the friends who took wedding-day hazing antics too far. Apparently, the groom was covered in ink, egged, tied to an electrical pole and was even struck by a car while fleeing onto a highway to avoid the “torture.”

A newlywed in China is reportedly planning to sue some of his own would-be wedding guests, claiming they took a pre-ceremony hazing session way too far.

Ai Guangtao, a 24-year-old from the Guizhou province, is planning to sue the friends who pranked him by covering him in ink, egging him, tying him to an electrical pole and beating him with bamboo — acts which Ai says landed him in a hospital after he was struck by a car while fleeing onto a highway to avoid the hazing, the South China Morning Post reports.

“I was so tortured on my wedding day that I got angry,” said Ai. “They chased me, and I could barely see anything because there was ink all over.”

BRIDE SURPRISES GROOM ON WEDDING DAY WITH 'SHOCK OF A LIFETIME'

“Now the insurance company is suing me, so I’ll have to sue my friends,” Ai said.

“Now the insurance company is suing me, so I’ll have to sue my friends."

Ai’s story was first shared by the Guiyang Evening News in late November, the Morning Post reported. According to the news series, Ai was on his way back home from the hazing at his bride’s home when he decided to hop over a fence and onto the highway, still covered in ink and eggs.

Ai suffered a skull fracture after being hit by a passing car, among other injuries, and was subsequently hospitalized for weeks.

The friends responsible raised 6,000 yuan, or about $875, to help cover Ai’s medical expenses following the accident, Ai’s aunt said in November. She also said they had admitted their guilt in causing the accident. Ai has since hired a lawyer.

Ai’s wedding ceremony was called off in the wake of the incident. He and his wife, however, were legally married before the ceremony.

The tradition of hazing a groom on his wedding day still exists in parts of China. The practice dates back to a time when arranged marriages were commonplace, and served as a way to relieve anxiety and introduce the bride and groom, per The Telegraph. The tradition also emerged as a way to force out evil spirits before the union, the Morning Post adds.

China’s Ministry of Civil Affairs had announced in December its intentions to crack down on lavish weddings that go against “socialist” values. Authorities were also said to be looking into increasingly severe hazing rituals, the Telegraph reported.