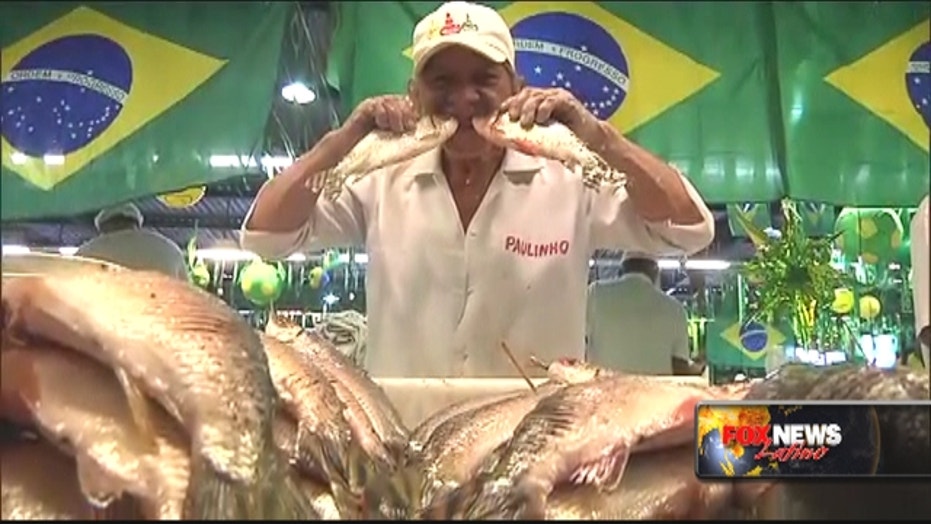 The next stop at the World Cup for Team USA is the jungle city of Manaus. Bryan Llenas brings you a taste of the Amazon.

Manaus, Brazil – Manaus is a riddle wrapped in an enigma and served on a bed of jambu leaves.

It’s a city of 1.7 million people tucked away in the dense Amazon rainforest. It’s a major manufacturing hub in one of the world’s largest economies, and yet it is thousands of miles from any other major metropolitan area in Brazil. Fishing is carried out much in the same way it was before the area was colonized by Europeans, and yet only a few miles from the port is an opera house that rivals any in New York, London or Paris.

What makes Manaus such a riddle is also what attracts people to the city where the Amazon and the Rio Negro meet. With Manaus playing host to a number of World Cup matches – including the much-anticipated U.S-Portugal game on Sunday – the city has seen an influx of people looking for good soccer and a taste of the exotic.

One easy stop is Manaus’ famous fish market. Once housed inside a French-designed building from the days of the rubber boom in the 1800s, the market has moved across the street but hasn't lost any of its culinary craziness.

Giant river fishes are peddled next to piranhas as well as huge mounds of bananas and enough manioc – the ubiquitous root found all over Brazil – to feed an army.

Across the street from the market complex is the Rio Negro – so named for its distinctive black water – and a jam-packed port where travelers can arrange to rent a cabin (or a hammock) upriver for anywhere from a day to two weeks.

For those looking for something a little less intense that the full-on "Apocalypse Now" river trip, many smaller boats offer excursions out onto the Amazon. Tourists can see river dolphins playing in the water, visit nature preserves where giant water lilies act as stages for birds in a kaleidoscope of colors and, of course, there is the “Meeting of the Waters,” the stretch of river where the dark waters of the Rio Negro and the yellow-hued Amazon join.

For about four miles the two rivers run side-by-side in a strange phenomenon that makes the river look two-toned. This natural marvel is caused by the speed of the current and the density and temperatures of water in each river.

While Manaus may be home to international businesses like Samsung and Honda, at its heart it is still a fishing village and much of its cuisine comes from the waters that surround it.

But it isn't like odd varieties of fish – piranha, anyone? – is the limit to adventurous options. The city offer some really exotic dishes if you know where to look.

Feel like turtle and manioc? How about some deep-fried sting ray or grilled alligator?

Hunting turtles and alligators is banned now, but O Lenhador is one of the few restaurants in the city that is still permitted to serve these traditional dishes.

Probably the most-widely consumed meal in Manaus is tacacá, a salty soup made with manioc broth that's topped with shrimp and jambu - a native green that tastes something like collard greens.

Tacacá is traditionally served in mid-afternoon, during the hottest time of the day. The salt in the soup causes water to be retained and may help prevent dehydration.

Whether it’s the adventure or the cuisine, Manaus has a lot more to offer than your average World Cup host city, so it’s advisable to stay a little longer.

Just make sure to leave before the rainy season starts in November.