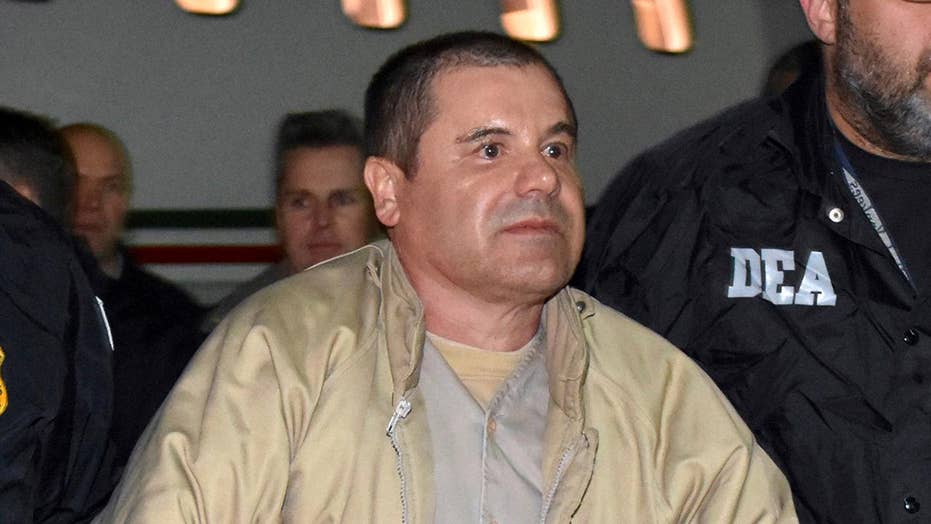 El Chapo sentenced to life in prison, shows no remorse in court

Notorious drug lord Joaquin 'El Chapo' Guzman launches into a courtroom diatribe on his treatment in prison and on trial before being sentenced to life in prison with no parole; Bryan Llenas reports from Brooklyn, New York.

Orange may be the new black, after all.

Drug kingpin and former cartel leader Joaquin “El Chapo” Guzman is now a veritable fashion icon in Mexico, thanks to a new clothing brand helmed by his daughter.

A woman holds up a shirt from the new "El Chapo 701" brand, produced by the drug lord's daughter, Alejandrina Guzman. (Reuters)

The fashion line was named after the infamous escape artist’s place on Forbes’ 2009 list of the world’s richest people, Mexico News Daily reports.

A man tries a jacket from the new "El Chapo 701" line, produced by the drug lord's daughter, Alejandrina Guzman. (Reuters)

According to the outlet, some of the pieces in the 20-item collection were crafted by prison inmates, with proceeds benefitting charitable groups, including addiction treatment and inmate rehabilitation organizations.

The merchandise includes jackets, hoodies, baseball caps, belts and more, with many of the items stamped with the “701” logo, the Post reports. The gear retails from about $35 to $100.

Though the business is still new, one sales rep said that the 701 collection has been met with mixed reactions.

“There are people who give us a lot of support, who like it, who buy things and come from other places to distribute our products,” salesperson Adriana Ituarte told the News Daily. “But there are some people who criticize us, who say we are promoting a drug trafficker.”

Alejandrina Guzman’s clothing line is not to be confused with the fashion and accessories brand produced by Emma Coronel Aispuro, the drug lord’s current wife, which also bears the 701 brand name.

El Chapo was sentenced to life behind bars in an American prison on a slew of murder, drug and money laundering-related charges on Wednesday.