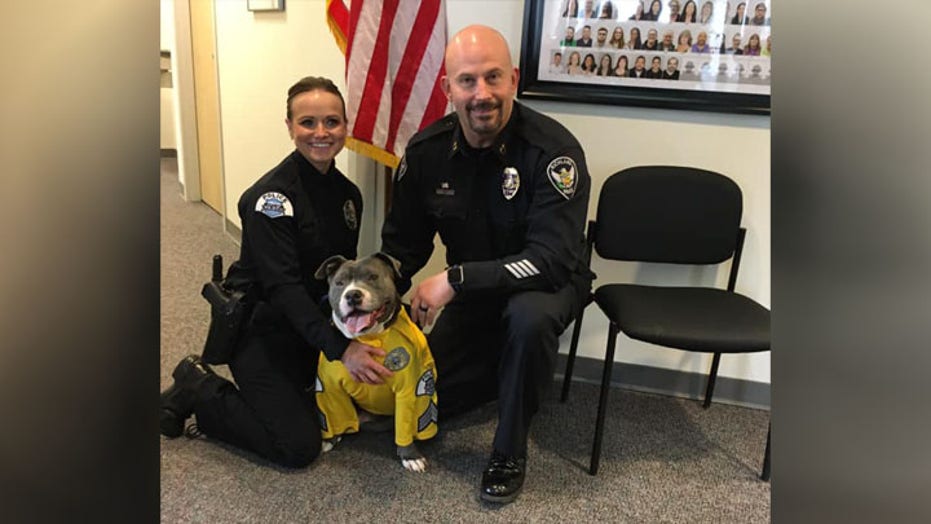 That's Officer Eddie Spaghetti to you.

A terminally ill dog in Washington state went from being homeless to an honorary police dog. After being sworn in, the local police department documented the animal’s one day on the force.

The dog, named Eddie, was found living on the street by Benton County Canine Control, KAPP-TV reports. It’s believed that he was abandoned before Thanksgiving. And according to a medical check, Eddie has an inoperable tumor causing him to go blind in one eye.

Eddie, who's nicknamed Eddie Spaghetti, was reportedly diagnosed with six months to a year to live. He’s being cared for by Kristi Kesler, his current foster mom. She decided to come up with a bucket list for Eddie to help make his last few months special.

DOG WITH 'WONKY' FACE FROM EARLY INJURY GETS ADOPTED: 'HE JUST NEEDED PATIENCE'

One of the items on the list was to become a K-9 officer for the local authorities, which the Pasco Police Department happily obliged. They shared photos of Eddie’s day as a cop on their Facebook page.

“We have finished our amazing day with K9 Eddie,” wrote the Pasco Police, “and we are overwhelmed with the amount of support the community has shown him. Eddie was welcomed everywhere he went and shown nothing but love and affection all day.”

The post continued by giving a “huge shout out to Mikey’s Chance Canine Rescue for allowing us to chauffeur Eddie around town. We also want to thank the businesses and people that helped make this possible. None of this would have been possible without you.”

The post concluded with the department wishing “Eddie all the best with his bucket list and future endeavors. It was an honor working with you today, Eddie! We hope you had as much fun as we did.”