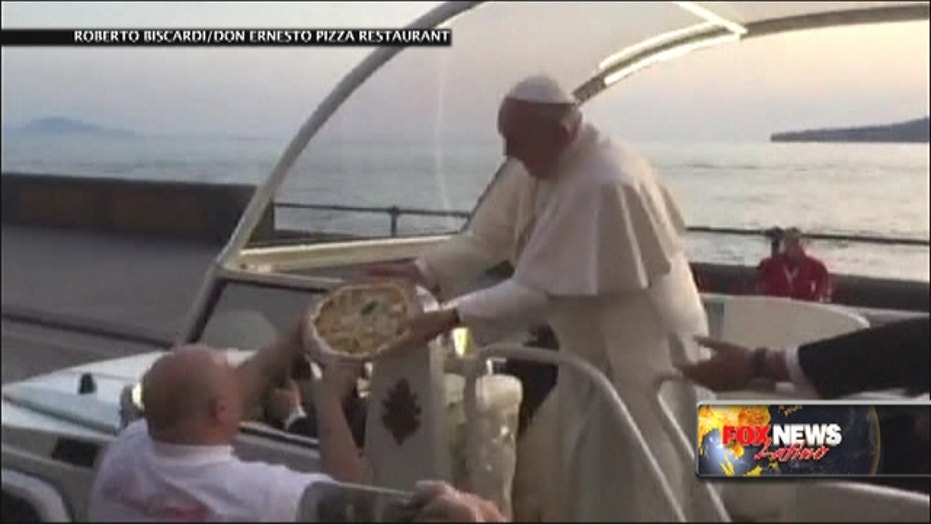 Pope offered pizza after saying he misses it

Pope Francis, who recently lamented he could not slip out and get a pizza like he used to, was handed a drive by delivery as he passed by crowds in his Popemobile.

Pope Francis has been gaining weight over the past few months and his doctors are putting him on a diet.

Vatican doctors told Italian news agency ANSA that the 78-year-old pope needs a more “disciplined” regime and to lay off the pizza and pasta. He also needs to walk more often to combat the stress of the job.

Luckily for the Argentinian pontiff, he doesn’t have to cut down of the goodies altogether – only indulge a couple times week, the doctors recommend.

Concerns about Francis’ health were heightened last month when he confessed that he believed his time as the leader of the Catholic Church “will be brief.”

“I have a feeling my pontificate will be brief. Four or five years, I don’t know,” he told Mexico’s Televisa. “Two years have already passed. It is a somewhat strange sensation. Maybe it’s like the psychology of the gambler who convinces himself he will lose so he won’t be disappointed and if he wins, is happy.”

He added, “I do not know. But I feel that the Lord has placed me here for a short time, and nothing more … But it is a feeling. I always leave the possibility (of change) open.”

Francis’ health has been of some concern especially after being diagnosed with lower back problems (sciatica). Doctors believe his new weight is likely also aggravating it – but walking more, instead of being so tied up in meetings, should help him.

Ironically, the news of the Pope’s new diet also comes soon after casually mentioning that he misses going out for pizza every once in a while.

“The only thing I would like is to go out one day, without being recognized, and go to a pizzeria for a pizza,” he told Televisa. “In Buenos Aires, I was a rover.”

The next day, a local pizza owner in Naples ran to the Popemobile to give him a personal pizza that said “Il Papa” in dough letters. He accepted it.

Cardinal Timothy Dolan, the archbishop of the Roman Catholic Archdiocese of New York, offered his own advice to the Pontiff.

“Holy Father, you said you always listen to your cardinals. Listen to me: Get a new doctor!” he said on the Today show. “Here’s what I do, Holy Father, this really helps cut down the calories. Take the basil leaves out of the pasta – and then you can have the whole bowl and it cuts down on calories all right. All I know is, the next time I’m in Rome, it better be on one of those two days that you’re eating pasta.”